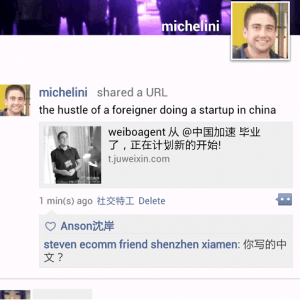 After just reading Mark Suster’s post “Entrepreneurshit. The Blog Post on What It’s Really Like.”, it inspired me to finish a blog about something that’s really been on my mind the past couple weeks – the added complexity, and the added “odds against you” of a westerner (foreigner) doing a startup in China.

I spent 3 awesome months in Chinaccelerator and have entered the month of November determined to keep this focus and determination on my new venture Weibo Agent. Still discussing with potential investors, still working closely with a core group of first customers on the product, building the team. Doing all the things I’m supposed to do as a startup guy.

Todd Embley the project manager is an awesome dude, and I remember one day venting to him about issues I was having in my startup. Internet, communication, etc. He said something like, this is why you’re doing it, because no one else has been able to do it. If it was easy, everyone would do it.

That stuck to me. I guess that is something that also got me to come back to China in the end of 2010. I’m just too stubborn.

Over the years in China, I have made some great friends. And I have kept up with them on social media especially. I think Chinese people really do want to see a foreign guy succeed in China. And man, do they seem to respect me for my efforts.

But I wonder, deep down inside, how much they think a foreigner can do in China.

I have awesome connections and build up great friends and a network of mentors. Both inside China and outside.

But there are some phone calls, with my old professors from Stevens tech, or a successful American businessman, and there will be points in the conversation where they just have to default to:

“Sorry Mike, I don’t know how it works there in China, but from my experience in business in America, it works like ______”

And advisors / mentors in China do not really have the ability to help me about international business.

I know, this is the value I am building, and what my purpose in life is about. But man, hearing these day in and day out, of people who are awesome business experts, not able to fully understand my situation.

Another annoying talk was about valuation of my startup, and who should invest – Western or Chinese-based investors. Being told I made a huge mistake in a bargaining table….when I can’t go back. But then again, I think I made the right decision, and there just is this huge unknown on all fronts.

I’m told American investors are easier on valuation, but they don’t invest in startups overseas – its too complex. And then there are Chinese investors, who don’t think you will succeed (because you’re a naive foreigner who thinks you have any chance to succeed in China) and maybe they’ll give you a low valuation if you’re lucky.

A Chinese investor looks at a white guy in China trying to do business, especially an internet startup, and writes them off. This guy doesn’t know business in China. This guy will fail. Even if he tries day and night, he will fail. “He doesn’t know China”

Talking to other foreigners in China doing business, they also hear the same things. And they are way more experienced than me. They speak fluent mandarin (mine is….well, needs a lot of work), and even they are told that they don’t know China.

I won’t give up their identities, to save them face, but they are just as frustrated.

And this is from Beijing, to Shanghai, Shenzhen, and those hanging out in Hong Kong. I’d say rather extensive perspectives 🙂

Realizing there really aren’t many people doing this…

After spending time in Shanghai in June, and then 3 months in Chinaccelerator, with geeks on a train to Beijing and Shanghai…and being in Shenzhen / south china for so many years, I think its safe for me to say there aren’t many people doing this….Westerners doing startups in China. They come and they go. They dabble, they do a million and one ventures (yes, I’m guilty as charged) and then they get burnt out, and then they leave China.

And there are a couple success cases, the Fritz from Qunar travel, and a co-founding partner from youkou (a youtube of China)

And thinking, how much easier it is for Chinese to do business in America

I have done both, helped Chinese go to USA, and helped consult Americans coming to China. America you can open a company online, bank account online, put some chinglish products on ebay and start making money. In China, ha! The amount of red tape, or “gray” business-lines you have to risk, its insane.

But its not just Western Startups in China, its any startup in China

The idea of a true, grassroots, bootstrapped startup in China is still rare. And the Chinese I have worked with are much more comfortable working in a larger company, for reasons such as:

So while I complain here, its also a huge struggle for a Chinese entrepreneur as well.

Its become my “True north”

Its taken over my thinking, my life. This is something I have to do, or as I like to say

That has become a tagline I’ve enjoyed sharing. Onwards!

Further readings for Startup in China

More Expat Friends Leaving China, Its Getting Harder to Stay!