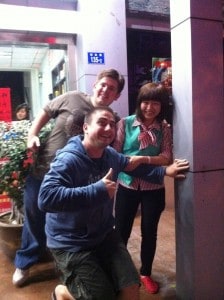 After doing more hyper networking in China, I am meeting more and more foreigners who are coming and going….learning from those who are leaving and coming and trying to reflect on it….

This article was shared to me by Boyd Jones over the weekend and it inspired this blog post – China’s Ex-Expats: Emerging Asia Beckons, discussing how many foreigners who came to China for business are now leaving.

Many expats, blog readers, and Chinese friends ask, why did I move to China? I do have to say, one of the reasons was cheaper cost of living than USA!!! That is becoming less and less of a factory – heck, many times its more expensive to live in China than USA these days!

To organize my thoughts, I think I will take a few quotes from the article and reflect:

Those that have recently graduated, or are aged to about 35 and haven’t yet found their way high enough up the corporate ladder

Many expats here in China feel that once “China doesn’t need them anymore, they’ll make it hard to renew passport visas and kick us out”. That is a valid concern – as Chinese love to learn…the feeling really is that once China feels they have all their own knowledge in their own people, they don’t need foreign teachers and workers…those jobs can go to their own people.

And in a way, I guess America thinks the same way about foreigners coming in as well. I can’t get upset by that. And Chinese people love to learn – they invest a lot of their money in education.

Also, I have seen many foreigners here get frustrated…and when people get frustrated they blame others and never themselves. I think its about adapting to the changing China and not seeing it for cheap products and cheap labor anymore….

China really is transitioning to another level and shouldn’t be called “developING” – its in the next stage of development and only needs high level foreigners.

But if the foreigner goes back to USA / Europe, no jobs anyway!

Both the United States and European economies are in the doldrums, and unemployment is rising.

I am working on another blog about tons of emails I’m getting of foreigners wanting to get a job in China as they maybe are having trouble getting a job in their home country. Or they want the experience in China. Or…they see the future of the world in China.

But yes, many foreigners here in China worry if they “Fail” in China and return home, they will look like failures, as well as have trouble getting jobs in America.

Returning home isn’t either a viable or interesting option, the good news is that there are plenty of other opportunities elsewhere in Asia.

My buddy Dan Andrews enjoys himself well as an expat in Indonesia doing online businesses and “Work from anywhere” businesses.

I myself have had thoughts to leave China. I did leave in July 2010 getting many well wishes good luck in my next country from Chinese staff and friends…but kept getting dragged back for consulting and projects. The action to me seems still in China

I researched opening a company in he Philippines and then have had trouble in Philippines plenty of times. Nowhere is perfect…

Costs rising in Asia, as US dollar decreases, costs in “developing counties” increase
China and other Asian countries are not so cheap

As I was researching other places to base I met many other expats who moved from China to the Philippines. Making the move is a big commitment….but still, SE Asia to me seems like a

I want to be in a big market, where the action is. I don’t want to work in a back office doing cheap outsourced labor. Maybe that is what brought me to China – but I did realize it was a large market to sell and do business in. It was a way I got into China….to find products for my ecommerce business and as a service – but now I am working to get Chinese to America!

Its not easy ANYWHERE IN THE WORLD…and USA, and Europe over in the west are going to get tougher and tougher as the economies repair. I can complain about any place in the world!!

Yes, China is a crazy challenge….but its a big opportunity.

I’m going to continue to see foreigners come and go in China…but I’m going to try my best to commit long term here. Its survival of the fittest

And I am making the transition and the commitment to do business with Chinese.

On My Way To ChengDu, China for Ecommerce Meeting