Last full day in Philippines, next step is Thailand. It still amazes me, Philippines is such a beautiful country…and the people are generally so nice and friendly…..how is it possible its under such difficult political and economical conditions…. 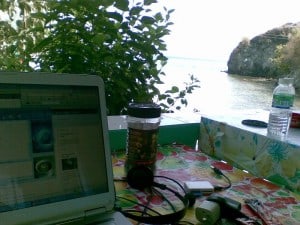 for example, our beach house this morning didn’t have power for a few hours….and this is a normal issue. Another issue is ELECTIONS ARE UNDERWAY – so a few people told me the power was cut because they alter the voting machines during that time. People here don’t bother to vote, because they know its not going to make a difference….being such a corrupt political environment, even if the people they want to win, wins, they are overpowered and thrown out. Its really sad…and scary.
So that makes foreign companies afraid to invest in this country, fearful the next political power will make it very unattractive or impossible for foreign companies to operate here. 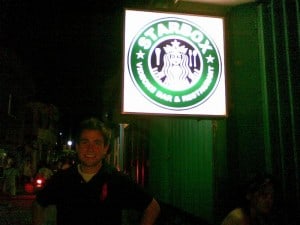 I just took this picture of the knockoff Starbucks here on the island. Its Starbox, with the same logo, and underneath is talks about being a video bar (karaoke TV, groups do singalongs) and a restuarant. You think Starbucks can stop them here, in this desolate island hours and hours outside of metro Manila? haha, not even starbucks can seem to stop this…..and as the world gets more and more “internationalized” with the internet and communication, who knows how this is all going to come together.
But at least the philippines doesnt have the GFW (great firewall) like what exists in china. the GFW is basically a huge virtual wall the Chinese government made to block foreign websites that don’t filter their results talking about sensitive political information and other items they don’t like (porno, gambling websites). Maybe the Philippines doesn’t do it because they dont know how? Or because it is too expensive to implement and monitor. I’m not too sure how strict the government is in the Philippines, I just know its not very stable….making foreign companies afraid to invest here.
But seeing these things, keeping an open mind, and listening to what locals have to say – all over the world – really helps me expand my horizon. I think others may not want to hear about these things, beggars and hookers on the streets, struggling small businesses held down by the local mafia. but it is a sad reality, and I wonder how time will change things, in the Philippines as well as the rest of the world. Will things become more similar from country to country, as we all share ideas and information more freely. EVERYONE in Philippines is using FACEBOOK – so its so easy for Americans to connect with Filipino people, see inside one anothers lifestyle, and culture.
Will the “flattening” world create better cross-culture understandings and respect….we can only hope.

Stuck on the Idea of Starting That We Never Actually Start?

In Los Angeles Having Injera from Ethiopia

The Ability to Work Anywhere

Back To Business In Saigon