Even though I’m “kinda on vacation” down in Florida with my family, I’m still keeping up with the daily news. 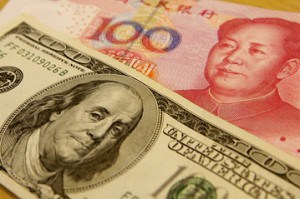 All this news about the Chinese government artificially keeping the US dollar low versus their Chinese yuan (rmb) currency –> USD/RMB – or a higher Chinese Yuan (RMB) to a US dollar (RMB/USD). Today I read on the news:

During the House debate, supporters cited studies that they said show the legislation would boost American exports and create more manufacturing jobs in this country.

“Some credible estimates are that we could return a million American jobs to this country,” said Rep. Xavier Becerra, D-Calif., in urging support for the legislation. “We can either take bold steps or we can take baby steps.”

Opponents said the legislation would boost the cost of clothing, toys and other goods that American consumers buy and also ran the risk of sparking retaliation by China against American exports.

“The available evidence is that the price of many of these Chinese goods will go up 10 percent, a pair of shoes that a mother needs for her child to go to school … toys at Christmas, all become more expensive,” said Rep. Jeb Hensarling, R-Texas.

Supporters rejected that argument, saying it is critical in hard economic times to protect U.S. jobs.

“Without a job, you can’t buy goods at any price. This bill is about jobs,” said Ways and Means Committee Chairman Sander Levin, D-Mich.

Passage of the proposal was cleared when Levin led an effort to craft a compromise proposal that supporters believe will be better able to withstand a challenge before the World Trade Organization, the Geneva-based group that oversees the rules of world trade.

Ok, so lets say that it may be devalued – and it appreciates against the US dollar. Is that gonna solve all the problems in the American economy? US distributors and importers are already looking at India, Vietnam, Thailand, and other Southeast Asian companies for new sources of factories and products. You really think that America is gonna start doing injection mould plastic again? That is a huge investment, those are gone now. And prices in Wal-mart WILL GO UP. So that means America will have to pay more for its good, while still having huge unemployment – while the US distributors shift their purchasing to other Southeast Asian manufacturers and suppliers.

There will be answers and solutions – but picking on the Chinese government is only gonna piss them off! Maybe not some kind of world war, but at least some extra tension. Maybe the US government wants that….challenging the pressure of the Chinese on the amount of debt it holds of US treasuries.

If you are interested in foreign exchange, let me know what your RMB/USD requirements are, I work with my friend Huck Leung at Fob LC in China! Many Chinese suppliers aren’t even quoting in US Dollars anymore, they quote in Chinese Yuan! So you can let me know – sorry for the “advertisement plug here” it just compliments the current story today!

Preparing for the Biggest SEO Conference in China, March 30-31