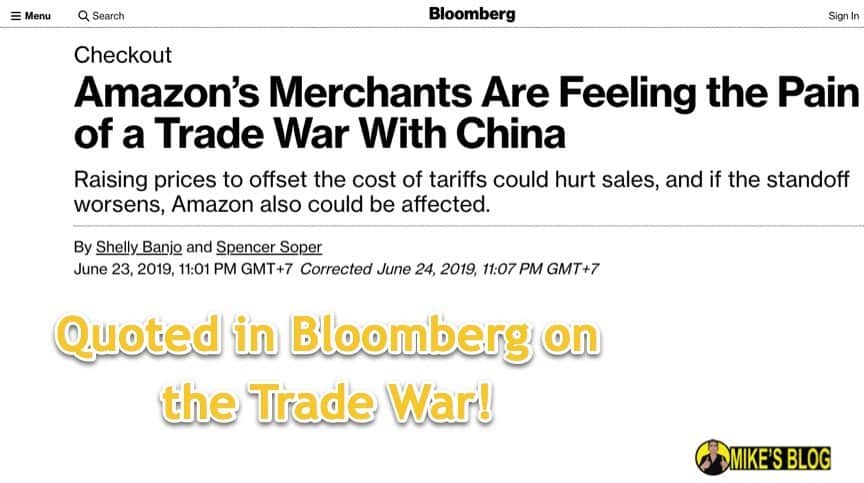 I’ve been talking to quite a few journalists lately about the effects of the USA/China trade war on small business owners.

And here’s a screen capture 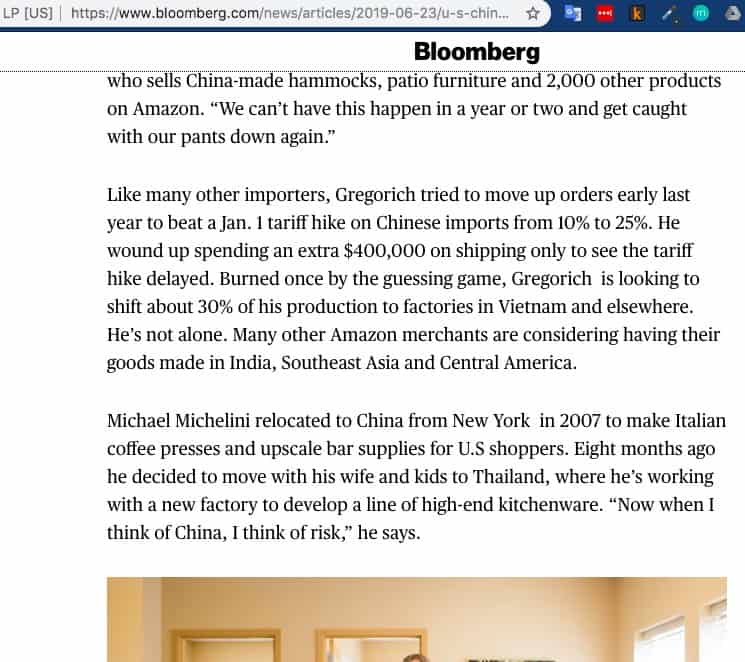 And here’s a PDF of the article (for the archives)

Business and Politics seem so much more intertwined – at least in my world of cross-border trade and ecommerce business between China, Asia, and the world.

Combined with HK protests – my whole world is being turned upside down. The game is changing.

David Watson Another great decision by trump starting a trade war with China considering china’s factories were boosted by American companies to produce and sell products cheap with no regard for the people or the environment in China,but you after living in China cannot see what a failed democratic society you were born in wake my friend and decide if you’re open minded or you’re just an American with a Chinese wife and mixed blood kids not seeing the real picture?
Delete or hide this
LikeShow more reactions
· Reply · 18h
Michael Michelini
Michael Michelini yes, America and the West invested and built the infrastructure in china – where did I say they didnt? As an American, I am seeing huge risk to enter China now as i said in the article

Cristos Petropoulos You might need to go bash all your American buddies who voted in that orange monkey. He has no clue about global supply chains and he will put the whole world into recession because of this stupid sh**t! And it affects Australia greatly, but of course trump just doesn’t give a sh***t..

Rosemary Matey Coates Nice quote, Michael. My friend, Joel Sutherland was also quoted. The US manufacturers we work with are also reeling from the cost of raw materials and sub assemblies coming from China. Although many manufacturers are conservatives, they are now very…See More
2
Delete or hide this
LikeShow more reactions
· Reply · 17h
Michael Michelini
Michael Michelini ya, it seems so abrupt…..and agree consumers are going to be the ones paying
Edit or delete this
Like
· Reply · 14h
Steven Marsh
Steven Marsh Rosemary Matey Coates . You are doing exactly what China wants you to do. If there is pain you will give in. We must fix this with China take the short term pain for long term gain
Delete or hide this
Like
· Reply · 11h
Rosemary Matey Coates
Rosemary Matey Coates Steven Marsh I don’t disagree that currency manipulation, IP theft, human rights issues all need to be addressed. However, I do not see how tariffs/taxes on US consumers fix any of those things. We need diplomacy, not lunacy.
Delete or hide this
Like
· Reply · 7h
Jonas S Karlsson
Jonas S Karlsson Yeah USA dollar is overvalued by currency manipulations 😉 considering how little is produced in USA the value should maybe be 1/3….

Steven Marsh Speak the truth. The USA must fix this or die a slow death . Trump is doing the right thing . Trump 2020

Michael Michelini a bit blunt, but yes I remember working at a machine shop in 1996 in my hometown Hartford Connecticut and a CAD engineer / mentor telling me USA is selling itself out outsourcing everything to India China

Alex Miller Steven Marsh what will be fixed? All the factories will move to south east Asia. There will be no new manufacturing jobs in America due to a trade war.
Also, if china stops buying USD, the currency will crash. We have more to lose than to gain.

Am I turning my back on China?

First of all – people are people. All this immigration and customs stuff still seems silly to me in 2019. One comment about me just being a white dude with a Chinese wife and mixed kids – because I moved to Thailand and am looking for factories elsewhere? Really?

Why do people need to be so patriotic?

So because I was born in USA, and because I have a Chinese wife and “mixed kids” (why mixed, aren’t they simply kids?) – I need to wear that hat the rest of my life?

As far as I’m aware, when I was my dad’s sperm, I didn’t choose to become a sperm in a certain host body over another host body.

We are all humans.

So as far as a business owner, and a provider for my family – I happened to have moved to Thailand due to the hyper inflation happening in China and unsatisfactory education options for my children for the criteria I was looking for.

So as a human being and a provider for my family – we looked elsewhere.

Back to my friend Andrew Henderson from Nomad Capitalist – go where you’re treated best. Not sure why so many other humans are so plugged into a certain geographical region based on where their mother lived when they were born. Seems really ludicrous to me and something that was a bigger deal 500 years ago before the internet and transportation technologies existed.

Memories of my “New Home Excursion” Trip With My Wife

Fun Sharing on The Events Podcast

True Passion – Sharing and Teaching People How to Earn a Living