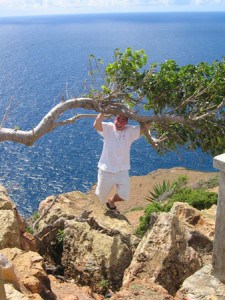 I remember when my friend Hasan visited me last August… he and other say I am still basically the same person I was in university….that hyper-active “kid” baby face who just won’t take “its not possible” for an answer. “Mikey likes it”, the kid who would take dares and dish them out just the same (getting in trouble a few times, but going down with honor).
I remember a university administrator, kinda acting like a mom-figure, telling me that I have a 30 year old mind inside a 15 year old’s body (this was when I was like 20 years old). So ten years later am I now a 40 year old mind inside a 25 year old’s body? Heck, I get people who think I’m too young to drink in America (under 21 years old) and I’m turning 30 in a couple months!

I guess I gotta just get over the babyface thing and embrace what I am given in life – DEAL with the cards I’m dealt. I think of Bruce Williams link who says in his book he can be “Dropped anywhere on earth and make something for himself”. Using stories like the newspapers on airplanes that would be tossed out after the fight, and instead saying you could make a business around taking the used newspapers from the flight and selling them in certain countries where the news is older (again, that may not work so well in today’s internet information age) but the point is – AS LONG AS I HAVE MY BRAIN and a will to succeed, I can succeed.

That is something about me I think I’ve always had, I don’t let things get in my way. And if anything, I have gotten even “crazier” at carrying out things most would think are impossible. And opportunities keep on coming, the network is getting larger and more complex, but I’m driving full steam ahead.

Hopefully I won’t get discouraged, I think even if I were to go to court, or to jail, or a hospital, it would set me back, sure, but as long as I have my will to survive ANYWHERE, not just survive but THRIVE then nothing can get in my way.
I hope others can also think this way, and stop making excuses why they can’t GET OUT OF THEIR COMFORT ZONE.

I met a cool dude at boot hk from Germany, Alex, and he did just that, he came to Hong Kong without a plan, without any (or only a few, not sure) and now has built up a network and gotten an opportunity to work on a startup team for Groupon China in Beijing!
He and I had drinks the other night, and we just said the power of networking, and getting out of your “comfort zone” and getting out there and making something for yourself.

Maybe Being Open on this Blog is Helping!

Maybe I just need a vacation – am I a good businessman?

Surrounded by people working to embetter themselves