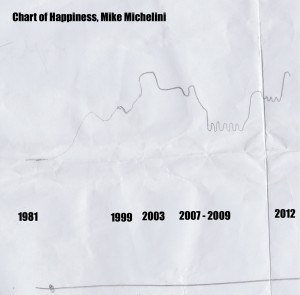 While in Shanghai, I had a mentor meetup with Liu Yan from Xin Dan Wei coworking community. The meeting was about how to be a good mentor, how to listen, re-iterate, validate and confirm, paraphrase, and give empathy. A great session and the community there is amazing and supportive! To open the meeting, we were all given a piece of paper and pencil to chart ANYTHING we want, and then present that to the group.

Everyone charted various things, such as spirituality (Lynn), Curiousity, Obesity, “being a captain”, and focus. I chose to chart my happiness over time.

I was happy to have this exercise, as it was something I’ve wanted to think about and blog about for many years. Attaching the chart in the post, and will try to write about the main points below:

I want to be the man in the arena and its not an easy life.

Liu Yan listened to this, as well as some other mentoring sessions, and she says “Mike, you’re a fighter”. Yes, I like the sound of that. I will not give up. I will not settle.

Lets see how the adventure continues to unfold.

Living Life as a Minimalist

Playing both sides of USA and China Internet

Back InTo China (Chinese Face To Face Requirement)