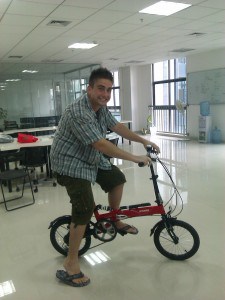 Didn’t think I would come to blog about this, but its been a hot topic on my posts in facebook, twitter, and weibo….guess talking about bikes and personal life is more engaging to people then business posts! People wanna see more pics of it (folded), more size details, cost, that I’m riding it inside the new shenzhen coworking space. Here are some from facebook (since its the easiest one for me to copy/paste and its hidden to public normally):

got a new folding bike…..petite but urban-useful. (hope it doesnt get stolen like the last one)
Added 23 hours ago

Jocelyn Peng, Gene Soo, Ed Chok and 22 others like this.

Jacob Hsu I think the thief don’t dare to steal it from your office, lol

Michael Michelini this is one reason why i got a folding one! Guards let me take it upstairs

Jacob Hsu u should pay more attention to your belongings when u in China, some guy broke in my house and steal my computer last year.

Louie Lopez Fong is it the Dahon one? how much? I used to have one but gave it away, wanna get one again!

Michael Michelini its an Oyama 6 speed, got it at Decathon for 999yuan

Michael Michelini hahaha, maybe at a second hand shop, or a stolen underground one where my stolen was probably ended up 😉

Louie Lopez Fong haha its new though, the site i sent you was thier website, super cheap retro bikes..

Lunie Rahj hey mike, you can just fold it and bring it along with you, thief cant steal it. =)

Mark Ambrose LOL infected with folderitis! welcome to the support group! i’ll invite you to the ‘tiklop’ group…it means ‘folding’ in filipino..

Des Koval Man, my bike got stolen from our aprtment on the 22nd floor. Lock down your stuff!

Junghoon Lee nice bike!. you look cute on it.

Eric Cheng Mike and his bike!! Freedom!!! Why not a scooter? Where’s your office! I’ll announce to my village that a free bike is up for grabs and see how long you can hang on to it!!

Magdalena Kudlacz Do women ride those too? Because if it’s predominately men you might deter theft by getting it in an unpopular shade – like hot pink. 😉

Jason Leung Wow man how much is this one?

Jochen Kleef Your co-working space very much looks like a cycle track. Any races coming up?

Jonathan Kirkland Awesome.. your new commuter? Where is the helmet?

Michael Michelini yea this is my new commuter “car”. I just like it cuz I can take it on the subway, into the office building, trunk of a taxi, etc etc without being hassled…its been awesome already!

Dann Diez where to buy and how much? i need one

Michael Michelini price is in the previous comments. I bought at decathon, but seen them at all the Chinese shops that sell regular bikes noww

Michael Michelini maybe make a blog about it 😉

Colleen Concepcion i have one! 😀

My friend Karta, from A Go To B bikes will be excited to see this! Why folding? A few friends called it “uber-gay” (haha, makes me laugh!) but I bought a folding bike for a few reasons:

And yes, riding a bike makes me happy….maybe its getting fresh air (well….is it so fresh in Shenzhen?), wind in my face, the freedom feeling of biking anywhere, not stressing about taxis or going into subway stations….its just cool.

Details on the bike:

I could have gotten a cheaper version for 700rmb (about $110usd) but single speed, no shock, and didn’t seem as slick. 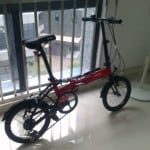 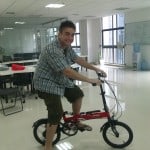 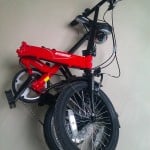 The Turning Point….When I Realized I Couldn’t Fail

Are You Ready to Rock? Weekend Warrior’ing

Back from Amsterdam…..trying to get back on my feet

Still Feel I’m holding myself back

more pics from the past few days