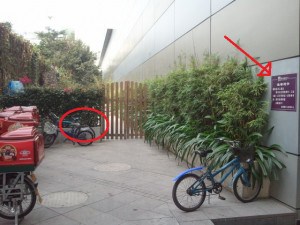 From the day I bought this bike, I knew it was a matter of time before it was stolen…..Everyone told me, don’t leave it out of your sight….locked or not locked…doesn’t matter. bought the bike in september 2008, so its lasted me a couple years…..did pay about 1400 yuan (200usd) for it….and it was nice….but I feel I got my money worth for it…..between money saved in taxis around Nanshan and a little bit of Futian and Luo Ho districts….plus the time saved not taking buses. And the exercise and Saturday trips with friends.

I guess its a good blog topic…..and its not the first time I have been robbed in China. Back in May 2009 I had my laptop stolen at a restaurant, right from behind my seat! This is the thing about Shenzhen, its not as dangerous really but things are constantly getting stolen like this.

What is most annoying is the inconvenience…..and that horrible feeling you get in your chest when your personal things have been taken from you……its what angers you the most.

I had just gone out for lunch to meet a business friend, Jim, who took over the lease in my old Nanhai office location. It was at PAPA JOHN’s PIZZA, in a nice area of town next to Wal Mart….all built up. The bike area was a bit secluded, but I saw so many bikes there, and Papa John’s delivery bikes….I had a lock…I was in a rush….I had nowhere else I could find to lock it up….and I would only be there for lunch. 1 pm after lunch I go around the corner of the building to the bike area, and its GONE. Just like that. All the other bikes were still there…granted mine was the most well kept. 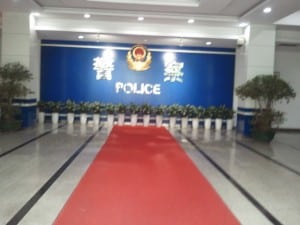 I know for sure the next bike I buy will be about 15 – 30 usd (100 – 200 rmb) screw it….just less material things to worry about right. Kinda funny that this happened only a few days before I leave, less things for me to jam in storage….. 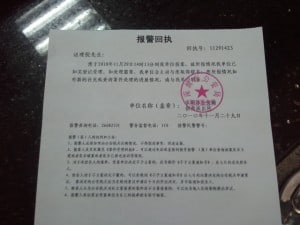 So Jim helped me go to the police station and file a police report….really not sure why…talked to friends, the possibility of it being found are like 0.01%. But its almost a creativity spawning experience to go inside a Chinese police station. This time, I am not sure if it was an interrogation or what, but there was a man screaming in pain behind a closed door…..felt kind of like a movie. As I was in the other room next door, we could still hear him screaming. Mind you, this is 2pm in the afternoon…..

Went through the basics, ID, where you work, etc etc. What color is the bike, brand, price…blah blah.

I gotta keep my mouth shut there…kinda getting frustrated and found one police officer who could speak some english. I asked him what would happen next – he said he would call me when they had more information. I asked can I get a loaner bike – don’t they have a stock of unclaimed bikes that had been stolen and found but not yet the owner came to take. He seemed confused that this could exist, or that I was asking? Then I said what happens to the thief if they catch him – for stealing bikes? He said that is not their job, and that it would go to the court. 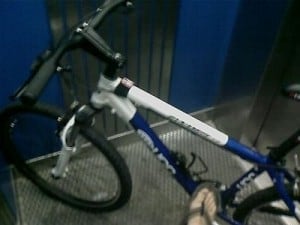 here is the bike when i first bought it

But this is why younger Chinese are so frustrated here…I have been chatting to people about it this afternoon. YA its my fault, I’m stupid to have left it unattended. Or its almost Chinese New Years (thats in February!) and I should pay more close attention as people want to steal to make extra money to get to their hometown.

But the police don’t seem to care….just filed a report, knowing nothing will happen from it…..and I am crazy to think else.

Maybe when I get back from Philippines I’ll follow up with the police…I left the description as vague as possible, saying blue and white and I didnt know the brand – so if there is one found like that, I can claim it?

Lesson learned, AGAIN – buy a cheap bike, and yea.. lock or no lock, don’t let it out of your sight!

Considering Homeschooling For My Kids

American in China Doing Business in USA – The Endless Struggle