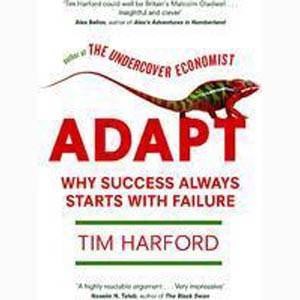 Committed my Sunday afternoon to finishing this book “Adapt, Why Success Always Starts with Failure” by Tim Harford, this excerpt really got my interest we are blinder than we think (page 17)….Humans cannot make the right decision every time, we have to learn by failure, we have to have courage to try, and have to have the right balance of confidence in making the best decision with the information we are given, but the humility to accept we are wrong, learn from it, and move on to be a better person and decision maker.

BUT HE MAKES AN AWESOME POINT when voters choose leaders. He takes us presidents election Bush vs Kerry ( page 20), leaders are voted in who say “stay the course” rather then wishy washy…..And Kerry is seen as a wishy-washy decision maker….changing his mind on many different debates….therefore not winning the votes from Americans who want a strong leader who will not bow down and give up so easily…..

whether we like it or not, trial and error is a great way to solve problems in a complex world…but leadership is not seen that way.

He reflects on the fall of the soviet union, explaining that feedback was supressed…..only central government made decisions, engineers were held captive from open free thinking and trial and error.

Book is also loaded up with great quotes, one by the Chinese leader Deng Xiaoping:

“Cross the river by feeling for stones” – Deng Xiaoping

Throughout the book, the author Harford constantly refers to Peter Palchinsky’s principles:

Funny thing also was it brought up Shenzhen, noted as one of a charter city from mainland China’s competitive threat to Hong Kong as China’s first special economic zone. (page 150)

Organizations many times have to take the bottom up approach, to have workers that are willing to adapt and speak up. Also “whistle blow” when his/her company isn’t following regulations or safety standards. And to reward these whistle blowers….the company must not punish them or ridicule them,

Trial and error will always be part of how any organization solves a complex, ever shifting problems (page 66)

On page 49 he talks about US president Lyndon Johnson was always confronted with a unanimous view from his advisor team, not to show dis….WRONG he needed to be presented with all kinds of perspectives, choices, data, information….clues…..

He proclaims Google as a great innovative company, and highlights that some of the recent biggest technology failures have been Google’s, but Google is smart to cut off those programs/products and focus on the winners.

The book’s last paragraph sums it up nicely:

The ability to adapt requires this sense of security, an inner confidence that the cost of failure is a cost we will be able to bear. Sometimes that takes real courage; at other times all that is needed is the happy self-delusion of a lost three-year-old. Whatever is source, we need that willingness to risk failure. Without it, we will never truly succeed.

Not from today’s book, but something I thought would be interesting to include in today’s post: From Harvard Business Review’s 9 things Successful People do differently:

This was a great read, as a “leader” and a businessman, I realize how I have to stop being afraid to make a mistake….but yes, I also cannot be too extreme in making crazy risky decisions that can completely bankrupt me either or lose my income. If we can master this balance…I’m sure we will be ahead of so many others in life.

The Dream Is Getting Closer To Coming True