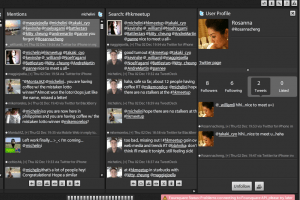 Been in Hong Kong a couple days, between Shenzhen, China and Manila, Philippines….and wanted to meet some contacts I’ve been chatting to on twitter to discuss web design…which ended up turning into testing out a “meetup” of various twitter friends in the Hong Kong area.

The beginning the “chaotic” organization started on Monday when I asked William Li to meet up Thursday afternoon for coffee….and then on the open chat of twitter, I invited a few other friends, which then got published out a bit more and retweeted (re-distributed) among Kevin She (CEO of SC Storage in Hong Kong, with 14,000 followers) and therefore made some more traction and got names and faces (@ usernames) I had not yet interacted with. Created then an actual tweet vite event to unite things more than simply a hashtag #hkmeetup

So we said 5pm Thursday at a Retro Starbucks in Central district Hong Kong….which we all thought was rather early as the majority of people still have their dayjobs and have to commute there….but alas, the confusion and mass tweeting created 5pm as the start time.
Somehow I got understood that I would be presenting on internet marketing and social media trends at the meetup….which I was not aware of or prepared for…but luckily I’m a nerd always carrying my backpack with laptop and am passionate about things enough that I could put together some info on the spot….Below are the twitter users that were in attendance:

The funniest thing is the reaction I get from my “real life” friends, who still don’t understand my infatuation and obsession with twitter..and why I would meet random people from the internet at a coffee shop on a Thursday evening. But I am connecting with these “random people”, following each other through our recent lives in business and personal life development, laughing and sharing stories along the way. For the most part, the common ideas is their interest in the internet, startups, entrepreneurship, and that seems to be the common users of twitter at the moment.

Then we get to the question…idea…are us twitter users obsessed? It was rather wild to see a group of about 10 people “checking in on foursquare” as we moved from coffee shop to pizza bar to nightclubs and pubs….talking about our internet and mobile habits….and all with the common idea that we are seen as a bit crazy by our non-twitter friends as we’re glued to the mobile phone throughout our normal daily lives.
Tweeting, blogging, checking in has been inspiring for me….I have always enjoyed writing a journal, recording my travels and my ideas…doing it online has allowed me to connect with people better then ever before…and I felt that common idea among many at the meeting. Andre there said he didn’t care, and almost didn’t want, too many people following his foursquare – his main purpose for checking into so many places, so religiously, as he went from place to place, and country to country, is the ability in the future to go back to his travel history and see where he had been. If he had forgot a certain name or location of a place he had enjoyed going to – he can look that back up on the foursquare checkin history.

Others had disclosed they closed other social media accounts, myspace, Friendster, linkedin, as they didn’t have time to update all of them, and didn’t want old or stale information about them around on the internet.

I had invited some “non-twitter” friends and throughout the night they met up….I could see the strange look in their face as they say this tribe of twitter users discussing checkins, other twitter users, and stories that would only make sense to at least a somewhat experienced twitter social user.

Made me think…will the world continue to draw a defining line between the “social” online community and those who resist or don’t have time / interest to understand and interact on the social online world…and will my life be split in two…the twitter world and the real-life world.

All in all, it was really cool to connect with twitter users I interact with, meet new ones, and put faces to “@ names”. Think I’ll try setting up another one in Manila, Philippines next week, stay tuned. Cheers.

My Mother In Law’s Fight With Melanoma

Doing OK As a Single Dad (Bonding with Kids)