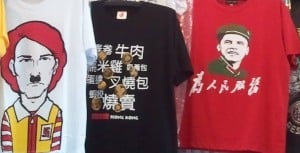 I’m in a bus on the way back from lunch heading to a government office to grab my passport with renewed work permit, then to hong kong….whipping out my laptop writing this entry. This is how I’ve been living my life….writing up blogs, proposals, emails from my mobile phone, from my laptop in transit – in a car, train, bus, subway, plane. On the beach, in a city, next to a farm. It just doesn’t matter…the internet is all over the place, and I “thrive in chaos” as some have said.
Speaking of chaos, I feel the current economy, the transition going on in the world between East and West…..international business, import export, ecommerce…and just business in general is one sloppy crazy shitshow. Sure you can say its management, but when 1 country deals with another country, how organized and managed is that?

Thinking of that wikileaks.com release of so many blunt conversations of world leaders and politicians….that just shows how “calm and orderly” this world is. And if you think things work smoothly in life, then you are WRONG, or just sheltered.
And hey, many people are sheltered….maybe there isn’t anything wrong with that. Not to pick on them, but us Americans do live pretty much in a bubble. It’s taken me a few years living outside to have my eyes opened truly to the global economy and the way things work.

Life isn’t fair. Life doesn’t always go as planned. And that is the way it is, so we have to adapt to it, or just shut up and deal with it.
Maybe this is just because I’m overtired today, had too many coffees and sodas and my mind is wandering….

…but really, THE WORLD IS NOT AN ORDERLY PLACE! Maybe if you deal within 1 domestic country, well, maybe 1 developed 1st world country like America, your life can be orderly. What you order will be what you get. The contracts you sign will be honored and upheld. The phone conversations on the phone will be the same dialogue as in email and on purchase orders and not manipulated.
But for so many people out there, (outside of America , maybe outside of Europe too), that is not how daily life works. Sure, China is developing and getting more mature…but still, orders are double checked before paid, contracts are long and each part is thoroughly read…..only to know that if it goes to the point where it needs to go to court, it’s not worth it unless its big money. Chinese people have dealt with this for generations, and it’s built into their culture, not to trust things for face value, to scrutinize and bargain for everything. Same goes for many parts of the world.

And I’m still no damn expert…it’s almost like the more I learn, the less I know. The world is so big, every economy, every culture is so diverse and independent. And I believe in today’s difficult economic times, in order to survive we have to be “light on our toes” and stay nimble.
I think of the “Lord of War” movie, where Nicolas Cage is so happy that the Cold War is over and the “evil Fing Empire is over”, and he meets his competitor, another “gunrunner” who was making tons of cash during the cold war, doing business between politicians. But with the cold war over, the chaos begins, Russia is being split up, no one knows who is the new leader (as Nicolas Cage put it – because all the politicians will be too busy squabbling who gets the guest resort on the Black Sea) , what the new rules will be. And this is when the next generation of “gunrunner”, Nicolas Cage, takes advantage to dominate the market. He is a “scrapper” who will sell to anyone, do business anywhere, and not be afraid to go where others haven’t gone. And he does just that, he wins during the changes in political and economic times.

Is that is what we need to do in today’s world? The world is changing rather fast in my opinion….and I credit that due to the increased flow of information, technology, communication – lower barriers to entry, less physical presence needed, virtual competitors. This is a time when you have to be a scrapper, do things others think is crazy, and try to get ahead.

This is just life, and this is just business. But to still focus on the right thing, and not just “think generally” like a macroeconomics professor. A couple months ago I was considering NYC as my center, as that was the market I knew, and thought I could boost my sales there…..only to realize I just get pulled back into the China market…even those in New York kept talking to me about China all the time, and it made me realize this is where the action is.
Just keep on truckin.