These are the times I get some of the most “real” perspectives of business and life in China, those times I spend a day or two inside an operating company. When I first was assigned to the new five islands ecommerce project here in Dongguan, I quickly looked up for people I already knew in Dongguan. I found my Chinese friend Slan, who i met at a xiamen SEO event last April, and have been building a closer relationship with him lately.

Mid last year, I was often in Zhejiang province and Shanghai traveling – spending time in similar small home offices….gets me most excited to see this. I remember as I was traveling through factories and other sourcing / ecommerce companies, news about factory suicides at foxconn was being broadcasted everywhere. So being “on the ground” really helps me get a unique perspective.

Last night I met a local english magazine, “HERE DG!” and they mentioned how difficult it is to find technical people here in more inland China city of Dongguan. They are not the first to tell me this….I have been learning more and more, but I was aware of this coming into the whole project.

Slan and his team are great, putting some photos in this post to show the team, its all 20 year old men, maybe because its more technical and computer work? It seems more prevalent here in China, but even in USA, the web and tech world is still for the most part men. 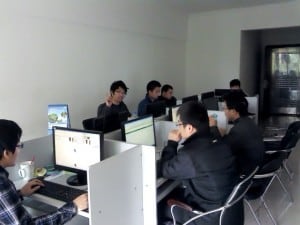 We have been sharing ideas for cooperation, also ways we build our websites and SEO. Lots of brainstorming. Talking about social media in China versus USA / English markets. Maybe work to build an ad network between social media gurus and advertisers. Lots of good, and fun ideas.

FOOD – The most cultural perspective is always discussed over food and drink! Last night we had dinner in an American bar here….where the burgers were massive, as well as the french fries. I was with 3 chinese guys and me, and they asked if this is normal dinner portion in America. Sadly I had to agree…and of course the comments and jokes about fat Americans came up. But it really is true….Chinese eat much less than what I noticed in USA.

GUNS – Then the subject of guns came up. Chinese feel America is not always safe, as the news always talks talks about the shootings and robberies in America. In America, we say it protects our freedom, guns are legal in philippines, while in China seems most people believe that having guns means it will be less safe. I am still on the fence about this one….as I worry about a government being the only one allowed to bear arms (thinking as an American “freedom fighter” attitude), but at the same time, hearing news about mass shootings in schools and public places doesn’t settle my stomach either. I think its about controlling who has the guns….there must be people in China who have guns illegally, just as there are black market guns in America. This topic can be a whole blog post, and maybe it will.

Just seeing the “heart of the Chinese economy” at work, I think a lot of the economic surge is due to these smaller businesses in China allowed to operate. I am a big grassroots, bottom up, kind of guy, and this entrepreneurship and “fight to make a better future” is what gives me hope on the future generations to come.

China, Finland, Euro, RMB – how lucky US English is

How I Ended Up Where I Am – More Reflections

How Much Longer Can The Chinese Economy Withstand its Growth?