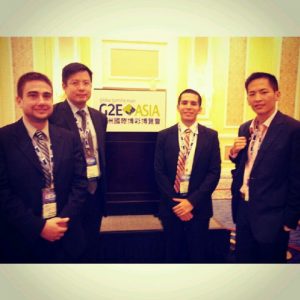 First blog post back on the other side of the world. Last night (wed, may 23rd local HK time) arrived to Hong Kong international airport at 10:30pm, went through HK customs, baggage claim – took the airport express to downtown Hong Kong island and met my old friend Andre Martin in a McDonalds in North Point (1am). Gave Andre a copy of the book “Startup Weekend”, he had me AUTOGRAPH it, as the “China startup weekend” rep (wow, feel honored) and spent the night over at his spare bedroom.

Woke up in a few hours (literally) and took the ferry from Sheung Wan to Macau to speak on Chinese social media at the G2E asia conference Chris Wieners from Hogo Digital invited me over for this session, it was the only session on digital media – as this conference and expo was geared towards casinos and gaming.

There were 4 of us on the panel session:

We spoke on the following topics related to Chinese social media, as related to the Western world. Below are notes during the session and prepared research I had compiled for today’s session, will share with those interested:

Q1 – What are the current social trends in Asia?
Because China is blocking English / western social media,

Q2 – What is unique about the social media scene in Asia, versus what we see in the Western World? Are international medias (ie Facebook and Youtube) adapting to fit the Asian consumer? Or do we see disruption from local, niche medias?

In fact, the current baseline data and users of the social media industry growth rates in Asia are basically seconds kill the rest of the world. And I understand the situation is very encouraging: Though Facebook and Twitter are very popular, the local social media, to a large extent, leading the development of the industry. When it comes to consumer social media, many Eastern countries more focused on commercial sensitivities and concerns of social networks and frontier, and its commercial development is also to be earlier than the United States and other Western countries. In addition, it used models vary, containing no less than of political order influence of cultural background and user habits. Such as Facebook, Twitter and others to the United States – oriented social networking site has been banned in China..

Social networks in Asia and Eastern Europe are different from those in the United States .All networks in China, micro – blogging in China, Mixi in Japan, CyWorld Korea, Odnoklassniki Russia and VKontakte Russia represent those of the country’s largest social networking site.

Spokesman Julien Chiavassa further pointed out that, the number of Internet users in China for the past three years has increased more than the current total number of Internet users in the United States .
Chinese are more readily in social networking activities on cooperation, rather than sharing personal information
http://www.caikuu.com/caijing/shangye/3036223.html

Q3 – How is 2012 different from 2011?
1. Social networks are moving toward deep integration.
2. Brand enterprises will be more actively on building their Social CRM
3. Internet users would like package service
Social media users will post all their problems or questions to one platform, regardless of whether it’s customer service, or pre-sale service and after sale service. Social media team will need all kinds of people, only rely on marketing, PR guys can’t meet the brand customers, potential customers’ needs.
4. Social e – commerce will surge
.SINA micro – blogging, social networking, naturally forming a trading center. Social e – commerce core point: purchase information is more credible when recommended by friend’s .to .balance the commercial and social media is the enterprises’ challenges.
5. Social media budget increases
The SNS budget will be divided into internal reforms of social media software, personnel and costs; external event planning, social media services.
6. SNS content marketing will surge
You can not just provide product or service information to your potential customers like what the traditional media are doing now. Content marketing is to provide excellent, valuable information to drive consumer purchase, cognitive behavior, which can better retain customers, increase brand loyalty.
7. Combine mobile Internet and social media (Social +Mobile！)
As the penetration of smart phones and more emphasis on immediacy, unlimited address, users can now know what is happening by phone ,it can also be done live. But only live does not work, also need to get the fans on social networking platforms involved .

“Companies in Asia are approaching Western levels of adoption but there’s a long way to go when it comes to community engagement in cultures where “face” remains more important than Facebook,” explains Bob Pickard, President and CEO of Burson Marsteller in Asia-Pacific.( Burson Marsteller – a public relations firm ) http://sproutsocial.com/insights/2011/10/social-media-marketing-asia/

Chinese SNS Users >300 million people
• Surveying the scene
• 1) The world’s biggest Internet user base—513 million people, more than double the 245 million users in the United States1
• —– figures are sourced from Internet World Stats data, as of December 2011 (US figures from March 2011).
• 2） China also has the world’s most active environment for social media. More than 300 million people use it, from blogs to social-networking sites to microblogs and other online communities.2 That’s roughly equivalent to the combined population of France, Germany, Italy, Spain, and the United Kingdom. In addition, China’s online users spend more than 40 percent of their time online on social media, a figure that continues to rise rapidly.
——- A McKinsey survey on Chinese consumers, China’s social-media boom . 2012

Q1 – What are some of the key components of a good social media campaign in Asia/China?

Q2 – Who are some of the key players with regards to social networks and social media in Asia?
Kaifu Lee

Q3 – Who are some of the players who are seeing great success today in social marketing throughout Asia? How about in China?

1) 3M, the maker of Scotch-Brite household cleaning products and Post-it Notes, has 11 brands in Asia Pacific
2) Wego.com: Big on Facebook
The social strategy at Wego.com, a travel search engine specializing in the Asian market, has three dimensions: community management, social advertising, and social integration, said Menchaca, who oversees performance marketing and social media for the company.
3) Fairmont Singapore: Know Yourself, Know Your Audience
Marketers must ask themselves the following questions before plunging into social media, said Nicholas Tay, digital marketing manager at Fairmont Singapore and Swissôtel The Stamford, two hotels in Singapore.
4) AirAsia – In China.

Q1 – Can you all explain what’s happening with regards to mobile gaming in Asia? In China?

To give some comparison, Facebook just announced it is seeing 60 million usersinteracting with its apps each month, leaving Tencent’s figures to show just how developed China’s Web space is. Tencent Weibo and Sina Weibo both have integrated games services and, with mobile a key Internet access point for many in China and Asia, a mobile games platform has the potential to succeed there.
Japanese firms DeNA and GREE have both taken huge strides with their mobile social gaming platforms. The firms are currently involved in a legal tangle but have been working to extend the range of their service worldwide, and both are active in China.
http://thenextweb.com/asia/2012/02/10/tencents-mobile-gaming-platform-hits-200-million-registered-users/

In China
China’s mobile gaming revenue is expected to grow at 51.5% CAGR between 2009 and 2014, reaching $2.5 billion despite current market barriers, according to a new report from Pyramid Research.
http://www.telecomasia.net/content/pyramid-china-mobile-gaming-reach-25b-2014
Mobile game meeting in June 2012 , Shanghai China.
http://www.mobileasiaexpo.com/mobile-gaming

Q2 – What is the ROI one can expect from a good mobile gaming campaign? Do you consider mobile gaming to be a good potential for building brand awareness?

Q3 – Can you share a case study or example of a successful mobile gaming campaign or platform?

Tencent’s mobile gaming platform hits 200 million registered users
10TH FEBRUARY 2012 by JON RUSSELL
Tencent this week revealed some impressive statistics around the success of its mobile gaming platform, Mobile QQ Game Hall, which has surpassed 200 million registered users.
According to a report from Marbridge Consulting which cites a Chinese news report, Tencent is seeing 13 million users on the platform every day, with usage peaking at more than 1 million concurrent gamers in the games platform.

Q4 – How can casinos leverage this type of technology to further develop their brand here in Asia?
Build your SNS platforms and make good use of it.
Knowing your target market
Measure your social media influence
Social Media is for the Long Run
Turn on your social media radar
Use clear, consistent and engaging messaging
Examining the Social Shopper

Q1 – What opportunities exist for casinos and gaming organizations in the social media world?
Build your brand awareness and talk to your customers or potential customers directly.

Q2 – How can casinos leverage their non-gaming content in China, where gaming promotion is illegal and can result in blocking of the brand?

Cooperate with local counterparts and consulting companies, do marketing research.

Q3 – How about loyalty programs? Do you see an opportunity to utilize digital media (including social) to promote and further develop a casino loyalty program?
Give customer good services, online and offline

Q4 – Can you give the audience an example of a low-cost, high-impact social activity (related to gaming)?
Kai xin games or QQ farm

Q5 – One final piece of advice with regards to building a social media strategy?
Knowing your target market
Measure your social media influence
Social Media is for the Long Run
Turn on your social media radar
Use clear, consistent and engaging messaging
Examining the Social Shopper
BE REAL

I had to re-schedule my USA trip for this conference, but it was well worth it. Got to meet all kinds of great casino professionals from all over the world. It is clear, Americans and western casinos have to invest the majority of their efforts in Macau and asia.

The world is changing fast. I also mentioned that Sina weibo has very high net worth individuals using it, more than I notice in Twitter. Maybe its because its easier to use and Chinese are also more accustomed to QQ and online chat – whereas older Americans feel its for kids.

Many of the people I talked to say Macau is the only casino property that is growing – those in the western world are steady or even declining.

I feel perfectly positioned to help Western companies with their Chinese social media – I love social media, have been doing business in China for many years, and am building a great community and team around me.

Time to get over this jet lag!

Success in Ningbo & Government Made Me Move my Bed!

Visit to a China Hospital