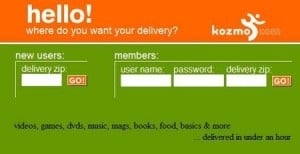 Taking a #bootup break (I’m at boot hk startup camp weekend) to reflect on my personal experience with kozmo.com. It was a summer intern during the dot com bubble – the year 2000 – what a great year. Magical – my freshman summer at Stevens Institute of Technology, studying computer engineering, living at my newly joined fraternity chapter house – Delta Tau Delta. Stationed in Hoboken, NJ – right on the Hudson River looking across at Manhattan, amazing dreams in my head. Just let me go through some of the experiences I had during this time, think this will best describe kozmo.com at the same time

Spring 2000: Freshman year wrapping up, summer internship hunt is on! Interviewing, networking, looking for a place to land my first college internship – get some experience, see what it’s gonna be like when I graduate college w/ computer engineering degree & starting making those six figures, baby! (seriously, this is what all the students were thinking – frosh to senior). Bling bling!

One of my fraternity brothers, Josh Griffiths, was at the time working part time at Kozmo.com, and he really said, “dude, you gotta work here”. Every day I’d be in the fraternity house, around dinner time doing the freshman pledge thing, and see him come in rocking jeans and a t-shirt….man that was awesome – I needed to get in on that deal! Josh has this special aura about him too; the cool Cali aura, but I’ll get to that another day! 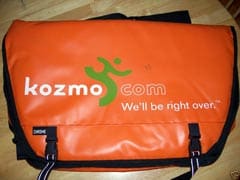 Few weeks later, I was selected for the kozmo.com on campus interviews, Josh wasn’t interviewing, but he prepped the interviewers for me. Man, they were cool, all these other big firms, Johnson & Johnson, Goldman Sachs, wearing suits – Kozmo.com crew – jeans, visors, rockin out – NICE! So I, as instructed by my on campus recruiters, had a new suit, tie, and the whole deal. After sitting in on some other interviews, I sat down with the kozmo.com guys – YES! They looked at my suit and made some kinda wisecrack….hah, I definitely woulda done the same thing in their shoes. So they go on, bring up Josh, talk a bit more, I’m only a freshman, but I got heart man, I want in!

Second round interview NICE – on site interview, only a few from first round are selected. Josh sits me down in his fraternity room, something like, dude, do not wear a suit there, I know these Stevens recruiters will tell ya – you MUST WEAR THE SUIT, but dude, just yea-yea ’em, and when you go to Kozmo.com at Broad street in New York city, you freaking wear whatever you want – meaning freakin’ wear shorts and a t-shirt, you got that! I’m thinking here, I gotta impress them over there, I gotta show them I really want it, of course once I get the job I can wear whatever I want, but in an interview? no way, that’s like a slap in the face….so sorry Josh, I didn’t listen to ya and I rocked the full fledged suit and tie.

I wake up early on an April 2000 morning @ Stevens Tech freshman dorm, throw on this suit, walk down to the PATH subway to the World Trade Center (WTC) in downtown New York. But I mean, yea I’d been there before, but to partake in that morning commute, crammed subways, mile long escalator getting outside of the World Trade Center Mall (basement of the WTC), that is something you had to witness to understand. Walking down from the World Trade, ten minute walk down broadway, left onto Wall street, then there, 80 Broad Street, New York City – which if you’re familiar with the city, is a few blocks away from the New York Stock Exchange (NYSE) and man – that was one big freaking party over there! I’m trying to get to this interview, and I’m not sure what was going on that day, my first time witnessing this, but there were free tokens, shirts, hats bursting out of the seams. One big party – some IPO going on, bunch of promotional stuff pumped into everyone’s hands walking to their offices, unbelievable.

Rolling to the interview, I had to speak with Andres Correal, much laid back, type B personality, first thing he says – grins – thought we told ya in the first round, if you’re coming onsite, can the suit! Dammnit, I shoulda listened to Josh – but ah well, maybe it helped- I take off the tie. Sitting down with Andres, rather quickly, and then had a few more technical guys talk to me, test my knowledge, brain teasers, etc etc. I got the job! Had a couple other offers – one working with some on-site school database system and another at some backend office for an investment bank – no way man – you got a new kozmonaut here, baby!

Few weeks later, freshman semester is over! Move into Delta Tau Delta fraternity for summer housing – man, I couldn’t have had a smaller room, but it was a room….a.k.a. Cedar Closet. Crazy hot summer, first day at the office of kozmo.com I was assigned to the DBA group, they had just leased a new floor at this 80 Broad Street corporate building, so cubes (well half cubes here) were still being installed. Ahfan Chan was my manager, very nice woman. Not sure if it was the first day or not, but I remember many coffee breaks at Starbucks on the corner. Very friendly people – remember getting my logons and the first day I ordered my first Kozmo.com video, scheduled delivery for 5pm that day so I could watch it that night. Sweet, I was in it, dead center of the dot com mania, and it was awesome!

Eveninigs come back to the fraternity house, pop in the new kozmo.com video in the pledge room, beers with the boys, life was good. John Davidovich as another brother there, working for a financial advisor firm, I forget the name of it now. He was looking to get me a part time gig there, Y2K or some sort of computer work needed to be done at night there…..nah man, I’m content @ kozmo.com – no need to stress myself out installing software after-hours at some financial firm…..you crazy!? But that was a memory of the times, IT work everywhere, money to be had, opportunities were a dime a dozen.

That same financial firm was slinging mutual funds, large cap tech funds! This is it, get in now, get in on the stock market boom, attended some presentations, looked at the 30 year charts, the rule of seven, yup, take your money out of the mattress and give it to these fund managers – they’ll make you rich! You’re only in college, a freshman? well then, just budget a few less beers a night and sock it away in these funds. Become millionaires with the rest of us! Well, we all know how that story goes….luckily, I was too lazy to open all these accounts, I had no idea what the stock market was, just some letters and numbers at the end of the evening news. I was a .com guy!

As much as I loved the tshirts and shorts to work, I quickly found database programming was not my destiny. We worked with a few different departments, software programming, marketing, and business management. Starting learning what others in the company were doing. But you got that feeling, late summer, rumors were out – no IPO coming, slowing growth, very early, but the sobering was beginning. I was scheduled to continue working there through the Fall, but I received a call from my Stevens Intern Program that I had to re-apply for a new job, and that one of my other offers I had declined was still available for september….no freaking way man! I was out of Kozmo.com due to cutbacks end of summer 2000, cutting me short of my 6 month experience. In any regards, I enjoyed my time there, walked down the Wall Street IPO mania every morning, took a tour of the exchange, and opened my eyes to New York City. wow.

Any job after kozmo.com was never the same, not that passion, heart pulse feeling of PR news hitting, kozmo/starbucks, kozmo/amazon – deals deals, growth, opportunity, to the moon! I hold these times I had there close to my heart, I was lucky enough to get a piece of the dot com world, and kozmo.com was probably one of the prime places to be

Note: Originally I posted this on Sunday, December 24, 2006 on an old domain miggity.com, but I’m going to re-direct the traffic here, merge the websites.

Everyone Pushing me to Sell USA Real Estate to Rich Chinese

Soon Mobile Internet Will Own Our Soul!

Feeling It – Flying Up In The Air