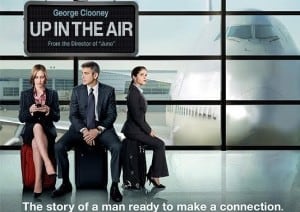 Its been a few days since I have been blogging…kinda off track as I’m getting more and more negative energy from people about why I blog, and why I blog here for free. and how people who I may not want to read it, read it. and how it may negatively effect my business having staff, customers, and competitors reading into my thoughts and feelings….but I’m gonna keep on going.

Its 5am sunday night (monday morning) and i’m hanging out on mike morelos couch….he is sleeping for work tomorrow, and I am on night schedule so I’m keeping on track even during the weekend (WHEN EVERYONE here is sleeping…..)

So he recommended I watch a movie called Up In the Air – which has George Clooney as the main actor. I had no idea about it before, but I gave it a shot as I’m hanging out on my own anyway.

It has struck me on 3 chords –

The idea of the movie is George Clooney is a “consultant” flying from city to city, company to company, professionally firing people from their jobs, in the masses. he explains to the newly fired staff that its not a negative event, but a POSITIVE ONE – as its a new beginning. And that humans are not to settle and get comfortable, but to be SHARKS.

So he barely has an apartment, but he does have a 1 bedroom in Nebraska. He is rarely there, as he spends the majority of his time on the road. He has never been married, or probably not many relationships. He feels family and the traditional “american dream” is overrated, and he prefers to be on the road and time away. Like he is escaping something.

And he is good at what he does – firing people – somewhat cold – but he is good at getting these newly laid off staff members somewhat positive about their lives.

His family forgets who he is, he does go back for his sister’s wedding, but he has a very small involvement in the wedding, as his sister and niece think that he is rarely around and how can he care, really.

Then there is the sad idea about the state of the US economy……how that the American has worked so hard, thinks that they are critical to the company’s operation, only to be tossed away like an un-needed piece of trash. Its sad…because in a way, I am involved with this, being in the Philippines, working in outsourcing and business processing and offshoring….I am directly involved in this revolution.

Lastly……is the idea that LIFE cannot be replaced by a computer. George Clooney is on the road, to talk face to face to those who are being laid off. But his company attempts to save money, but having it done remotely over the computer via video conferencing……….but to deal with such a delicate human emotion – being told you are no longer needed for the company you have worked so hard for, for so many years, is no longer needed…how can that be done by a video conference remotely…

Sadly, it doesn’t work, and one of those fired staff cut off via a online video, commits suicide, and the whole video conferencing firing operation is rolled back….BECAUSE YOU NEED HUMAN FACE TO HUMAN FACE interaction during delicate times…

But man, this struck a cord for for me……the US economy, the lay offs, the outsourcing, the traveling, the video conferencing and computers replacing human interaction…..

What is this world turning into….makes us all wonder….

Memories – Reading my First Journal from May 1997!

New York is Still The Center of The World

My Chinese Friends Are Asking to Hire Americans!