I have been spending a lot of time with my friend Jon Conte, whom I met in ITALY back in 2003 when we were part of a scholarship program for Italian Americans to learn about their heritage in Italy…..we were both living in New York at the time, so after our return from italy, we would spend times partying in new york city, as well as some other fun road trips. pretty funny that years later, we are in regular contact, and both in china pursuing our dreams, looking for something bigger than where we started. 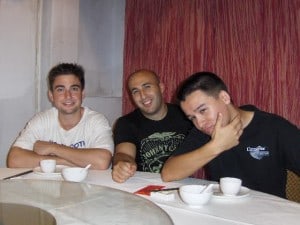 Photo above: me, Jon Conte, and David Ho

Sitting next to him now, and we are both laughing about that. He and I both say we are in China for such different career purposes, but the same idea that USA is in a bad spot now and the future of opportunity is here in China!

Below is his MBA personal statement, he is studying at Fordham University in New York City and in an exchange program with Beijing University. He allowed me to put his statement of use to receive funding, so if you would like to read this before I start asking him questions (below this text). Right now I am helping him get his own blog setup on jonathanconte.com – check that after the next couple days to see what he is up to.

I have always been a high achiever and I believe that my academic and work records speak to that effect. As a youth, I attended Regis High School in New York City, an all-scholarship boys Catholic High School, where I had my first experience in the true qualities of Jesuit education and learned the Jesuit credo to be a “man for others.” I am versed in the classics, having studied both Latin and Italian while at Regis, and it was in these classes where I originally noticed my love for language and the opportunities linguistics opened to experience and interact with foreign cultures. Regis High School pitted me in my first international setting, as I commingled with young men my age from around New York City, most from backgrounds far different than my own Italian heritage. In many respects, it was my experiences at Regis that crafted my intellectual development, as I escaped the homogeneity that characterizes most students’ high school experiences. I have never been afraid of others’ cultures and I embrace the diversity that characterizes our human experience.

Upon graduation from Regis in 2000, I began my undergraduate studies at Fordham University. I was enthralled with the qualities of a liberal arts education enjoying my subjects equally but particularly enjoying philosophy, economics, language, and history. Following the completion of my first semester at Fordham, I was asked to participate in Fordham University’s select Honor’s Program. I readily accepted the opportunity, and was pleased to undertake my classes in a more close-knit and structured environment outside of the University’s general core track. My time at Fordham saw my initial foray into the international sector as I obtained my degree in International Political Economy, partaking in this multidisciplinary field and studying key subjects such as International Politics, Economics, Italian language, and Anthropology.

Nevertheless, excluding my course study, my attempts and opportunities at exploring my passion for the International Development field were very limited. In many respects, my efforts at this time were not to the best of my abilities, particularly for someone seeking opportunities in a field which requires significant independent study and outside internship experience. There are several reasons for the lack of development of my passions at this juncture of my life, but none more prevalent than my need to work during my undergraduate career in order to support my education. I was a commuting student as an undergraduate and although I received a modest scholarship, it was necessary for me to maintain employment throughout the year to meet my expenses. My first working experience in college was working for my local City-Councilwoman in the Bronx as a legislative assistant. I participated in this role starting in sophomore year and continuing through my first year after Undergraduate graduation. If I was to characterize my favorite aspect of my work at the New York City Council, it was definitely the opportunities I had to help others. I am particularly proud of some of the programs I was able to arrange such as flu shots for senior citizens and free dental screenings for children. At the same time, I found the day to day interactions and inter-workings of New York City politics devoid of the cross-cultural opportunities that so endear me to the international setting.

The Councilwoman I worked for was on a term limited appointment and following the expiration of her term at the end of 2005, I was at a cross-roads. Believing that security and stability were necessary aspects for my career I began my MBA in Finance at Fordham University and also started on a career in banking in mid-2006. After three years in the banking industry, both at The Bank of New York Mellon and Merrill Lynch, I learned several important characteristics about myself. For one, I was very good at the work, but truly this never endeared me to my day to day tasks. I am a high-achiever from a hard-working middle class background. When put to task, I do not know any other way to respond than to do my best. My grandfather was a working class immigrant, who left his home in Italy at the age of seven-teen to make his way in America. The dirt that stained his hands from a hard day’s labor is still present in my mind’s eye. I will always work hard. Secondly, I learned that I do not like, nor am I am I man who values the trappings that are associated with an investment banking career. I have no great love of monetary gain, which whether good or bad, is most definitely a key motivator behind a banking career.

The financial crisis was also a crisis of conscience in my life. I watched many people around me, good people, lose their jobs and feel lost as they faced a juncture in their careers. Their careers had been dominated and characterized by what the firm expected them to be, what the firm expected them to know. Now the financial crisis put them in a position where their skill sets were less their own and solely dominated by what they had been bred to be. They now stood lost with nothing to show for their efforts except a mortgage payment and car loan. I did not lose my job during the financial crisis, but rather I found the courage to believe that my career can only be dominated by work that I am passionate for. I do not value money, but rather I value knowledge, wisdom, and experience. My career should not be developed by an organization, but rather should be developed according to what I love and who I am innately at my core.

So here I stand before you, having left my job at Merrill Lynch in July, refocusing my degree aspirations to the study of Management and Leadership. I have begun my foray into the International Development field some 5 years after earning my undergraduate degree. My life has come full-circle, but I have been tempered and emboldened by my life-experience. My values are unshakeable and that is truly the wealth that I have received these past 5 years.

My career aspirations are clear. I have been studying abroad in Beijing, China this fall semester and this experience has led me to form a passion for the people of China and a burning desire to master Mandarin. My time at the UN Democracy Fund this spring will open significant doors for my career. I believe it will be the perfect bridge for my political and financial backgrounds, but most of all ensure that my daily efforts are devoted to bring about change for the betterment of others’ lives.

So now that you got a better idea of where he is coming from….I am going to start interviewing him with some questions and get his own ideas.

in his own words:

i was originally a finance major, and was to follow the lines of a banker, continued in finance in Merryl Lynch – or another bank as a trader. but soon i realized i didnt have a passion for the work, for finance in general. so i feel my original path was misguided because i am more macroeconomic as i am more interested in politics. i switched to management because i didnt just want to be another guy who got an MBA for a better job. i value knowledge, wisdom, and experience. i wasn’t getting those, and i felt my MBA wasn’t allowing me to get it. my school is an b-mba, and wouldn’t help me get that much higher salary. a lot of the classes are like my undergrad. so i didn’t see the value from the traditional school outline – so i made my own based on the social – political side, instead of on the finance and math side. That is how I ended up in China, reading up on the political issues, this is the next battleground of the next century, or at least half century. USA has a lot of work to keep relations with China.

what about the students in your class

here in China, its 70% chinese. i am noticing that the chinese are going to mba for the same mistaken reasons americans go for an mba – just for social standards, to make more money in their jobs – but not for true embetterment. they are more focused on monetary gains then on knowledge. they see the mba as an opportunity to make more money, which i feel is the wrong reason to get an education. the only extra benefit in china as an mba is still more noticable than in usa. in usa, everyone these days seems to get an undergrad, and it doesnt seem to differentiate your self from one another. “once you start giving everyone a gold metal, its not a gold metal anymore.” everyone has an undergrad in the usa, and its almost getting that way with an mba.

there aren’t enough risk takers in mba programs anymore. they are just after money. my view in life now is money will follow what i do. i am not sure how much that will be, but the money i make will suffice for what it is a truly enjoy doing.

anything else you want to add.

it upsets to hear me that fordham university is offering a 2nd degree for chinese students who want to get their fordham degree. its a 5 week program in the summer for $10,000usd. these chinese students save for so long, and is this investment worth it. 5 weeks in usa for that much money. seems fishy to me.

Well, I have talked about MBA in the past and I hope my chat and discussion with Jon give you another angle.

you can see some of my previous posts for your reference

surrounded by hard working people – does it require an mba

maybe i should have gone to mba school…

Business in USA is Easy Compared to China Business

As The US Economy Continues Its Decline….More People Look to China

Settling Back In China, My Long Term “Home”?

Looking Back to When I was 2 years old….now ending up in China