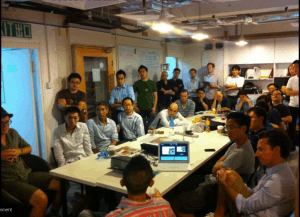 Startups Hong Kong has been growing to be sooo packed, this photo was from William Liang tonight. There are more organized speakers coming, tonight Derek Kwik attended, a venture capitalist in technology and mobile payments. A very ambitious, sports bugg, having running across 4 deserts.

He mentioned the theme adventure racing and showed a video of yearly events all over the globe where over 50% of those attending drop out.

After the video of adventure racing, he took out his powerpoint having titled his presentation: “the new normal” by Derek Kwik

What is the “New normal”? Life changes so quickly. things will not back to the way they were.

He corrected that its actually been 7 deserts and not 4, 2 jungles, 1 mountain. he has 2 remaining adventure races left.

I liked this quote:

difference between astronomers and astrologers – will you gaze up at the stars, or will you go and explore?

He even wrote a book, Kwik Fix, and donated proceeds to charity. (this is a personal dream of mine!)

Do the Hong Kong Oxfam Hong Kong Trailwalker. 4 team members, 10 checkpoints, 100 kilometers as fast as you can. His team quit, and when he went back to his office and told people he didn’t finish, and repeating it over and over, he felt regret. 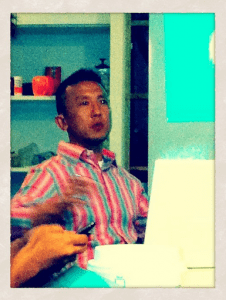 how do you train to run across the desert? 250 km, break into checkpoints. Run on treadmill on weekdays with his backpack on. On weekends. run hungry, run sleepy. run sick.

Why do we fear the unknown……because we lack repition, lack a routine. we cannot panic. recognize fear, accept it, limit it.

#SUMHK: How to motivate yourself to do the impossible by Derek Kwik

Derek is the first Chinese person in the world to run across the 4 major deserts of the world.

In both his professional and extracurricular accomplishments, Derek has been routinely featured in several international and local publications. Derek is a regular motivational speaker to children’s schools, corporations, governments and professional organizations. Derek is one of the largest individual charity fundraisers for the Society For The Prevention Of Cruelty To Animals (SPCA). Derek holds a world record in ultra-marathons for being the first Chinese to successfully run across the Sahara Desert, the Gobi Desert, the Atacama Desert and the South Pole. Derek is the author of a motivational book titled “Kwik Fix”.

It was another great meetup, boot is actually overflowing…I think there needs to be RSVP soon…or a bigger venue.