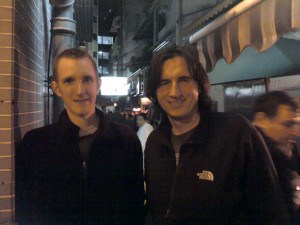 Maybe this will be my future for the next year or three? I am getting better at it, having my passport on me almost all the time (yea, I know we’re supposed to anyway, legally, but who really does carry it all the time?), have multiple bags holding different currency and keys, multiple phones / tablets so I don’t need to be bothered to switch SIM cards when I cross borders. I am going to probably just get 2 wallets as well, so that I change them when I cross borders…as changing credit cards, subway cards, and currency is getting to be tiresome as well.

Maybe this was my dream, what I always was looking for…..to be that mysterious businessman with multiple apartments, multiple briefcases, multiple lives….maybe its like they say, be careful what you wish for.

Thursday night I was in Shenzhen, I missed a ride back to Hong Kong with Gary (man that is making me lazy to do it the old fashioned way) so I had to fend for myself with taxis, subways, border crossings, and buses. I was almost going to stay in Shenzhen until Saturday afternoon, but had a few meetings in Hong Kong, but one of my top blog readers / commenters and old time friend Piotr came to Hong Kong for the WEEKEND (that is crazy, right? I would think by the time you get over jet lag, you’d have to fly back!) so I had to get out to see him Friday night in Hong Kong, as he didn’t get a visa to mainland china (shenzhen)

Hustling back Thursday night to Hong Kong…..had to catch up on rest ASAP after some USA phone calls, as I had a jam packed Friday of meetings with programmers, marketers, accountants, and potential alliances in NY style mobile apps. Jeez, its overwhelming and impossible for me to fully explain in a blog post.

Life is moving so fast.

Friday night, after the long lineup of meetings on Friday afternoon, I met up with Piotr and his USA friend Tim (in first blog photo). I would explain the full story of why he was here, and Tim, etc….but they are more private and asked me to refrain from the details. ……guess I am just too used to be open and public about my life that I forget others appreciate privacy…..it was actually funny as Piotr said “hey Tim, my friend Mike is a regular blogger so be careful what you tell him – it will be in the blog the next day! But it was a good (EXPENSIVE SOHO) dinner with them, some more EXPENSIVE drinks at Azure in Lan Kwei Fung, and then I had to force myself to leave early (1am) to catch some ZZZs, before the next day’s big Shenzhenmarketing.com meetup for internet marketing, ecommerce and SEO.

Saturday morning woke up around 8am, forcefully, and then rushed to shower and go to the bus. Met Alex Hornstein, a friend of mine here in Hong Kong from MIT to start a product incubator company, as he was coming with me to the shenzhen marketing meetup to present on incubators and coworking / hackerspaces.

Luckily the border wasn’t too busy in Shenzhen Bay border, so we got through and I had time to go to Coastal City where my office is, to change into my suit and get to the High Tech park, King dee building a couple hours before the 1pm start time to make sure things were organized well.

I will blog tomorrow about the results and details from the shenzhen marketing meetup, but over 100 people showed up, and I think it was a healthy mix of Chinese and foreigners (I really want it to be equally weighted).

Had a large dinner afterwards with the other volunteers for the meetup, at Marshall’s new bar – Jordans bar, in Rose Garden of Shekou. Wanted to get back to Hong Kong right away, but instead went with 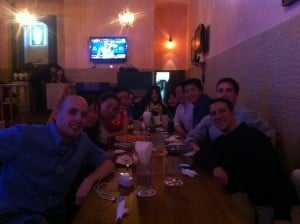 So exhausted, but my bags were stuck in Larry’s hotel he rented at the Seven Days inn in Futian…near huanggong border…so I had to keep pushing him to leave the club. Larry is a smart dude, and speaks Mandarin Chinese fluently, so he could communicate easily inside the Chinese nightclub, whereas I am a bit limited (ie, i SUCK) at my Chinese, and I was exhausted from the meetup and the rushing between borders the past few days.

Getting back to his hotel at 3am, I grabbed my bags and taxi’d it to the Huanggong 24 hour border to catch a bus to Wan Chai, Hong Kong. Getting back to my apartment at 430am…I crashed….and I slept like a baby til past noon…..

Been spending the past few hours this Sunday afternoon to sort through my bags, jeez I had many pockets full of name cards, coins, keys, receipts….smelling like smoke from the Chinese disco last night….still haven’t unpacked from Thursday night and already have to prepare to go to Dongguan Tuesday morning.

Heading out after I hit “publish” on this blog post to meet Piotr and Tim at their hotel for dinner.

Who To Trust While I’m Outside China

Sharing a USA Experience Through A Chinese Person’s Eyes