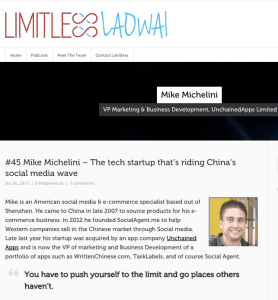 I’ve been hosting a podcast for over a year now, but have not had the chance to be on a podcast interview since JP had me on China Business Cast in late 2013, and on Terry Lin’s Build My Online Store episode 3. So this was a fun time to get on the other side of the microphone and get interviewed on the Limitless Laowai podcast, listen to my interview in episode 45 about my experience doing a tech startup in China and “riding the social media wave” as she titled it.

True, I think some of you may be asking what is a laowai, if you haven’t traveled to China much you probably never heard of it. Basically it is a Chinese word meaning foreigner. The podcast is about foreigners in China, their experience, business, perspectives, and lifestyle.

The show is cranking a lot of shows out, with 4 interviews a week, and then the host, Ally, does a recap on the 5th day. Pretty hardcore and props to the host Ally Mona for keeping up with this. I do a show weekly show and find it hard to keep up with that schedule, doing it five times a week is definitely a big project!

She has a wide range of people she interviews and topics, some of the ones I really thought were interesting were ones where it discusses expats who were in China and recently relocated back to USA, Limitless Laowai episode 40

Also they have interviewed a couple of my friends such as Gary Isse and Rose Symotiuk both some awesome entrepreneurs in Shenzhen I’ve gotten to know over the years.

I love podcasts and that you can get to know people so much more intimately and deeply without having to “meet for coffee”. I’ve been leveraging all of this online content, and it is great too because I have a newborn baby at home so I don’t have as much time to go outside anyway!

Trying to Keep It Real

I didn’t hold back on my answers and didn’t want to “fabricate” anything. Some people who listened to the interview think I talked too much about failure and mistakes. But I think that is how people learn the most. And I am not afraid to tell it how it is. Mostly the feedback from friends who listened said the show was genuine and they learned a lot. And that is all that matters right?

Mike, we definitely had some laughs and a couple of hilarious ‘only in China’ interruptions! What I love about you is your honesty and candid way you look at life and business in China. Keep doing what you’re doing… it’s WORKING!

Listen to The Interview!

So tune in, I remember when I was reluctant to listen to podcasts and preferred reading, but once you make it a habit to listen to audio, you can consume so much more content when you’re in transit or stuck between meetings. But even if you don’t have iTunes or an Android player, you can stream it on the website directly. I hope you can have a listen and also give Ally or me feedback –

Announcing China Business Cast as Part of the Media Group