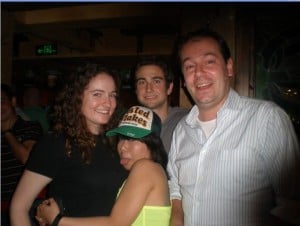 Every day I struggle to be sensitive to so many different cultures (ok ok, so maybe not really sensitive, but at least aware!) Being an American, I can say I grew up DUMB to international cultures….even though I spent time in a university with Indians, Chinese, and others, as well as almost 5 years living in New York City – nothing really compares to being outside of USA and dealing with such a variety, outside of your homeland.

Take for example last night, I went out for Saint Patrick’s day. First I had dinner with some friends and family (Jojo, Raine, and her family), and ate a wide range of homecooked Chinese food. I invited them out to the bar for Saint Patrick’s (they weren’t aware of the holiday, actually yesterday (st patricks) was also a famous day in China to get a haircut, it would give you good luck supposedly), but they don’t socialize in bars. Chinese people, especially the girls, don’t normally enjoy spending time in a bar. Maybe in a KTV (singing) or tea house, but not a bar. And if its a bar, its normally private tables and a limited amount of dancing.

Anyway, so they didn’t join me on my trip to the bar – and I ended up meeting my foreign friends there (see photo). It was an Irish pub – fitting for the holiday, and I met my American friend, Brent and a couple of his american friends, with him were 3 dutch people, a korean girl, and a socialite Chinese girl – Kiko Wu.

The discussions were rather wild, and the 2 American girls had just been vistiing for a couple weeks, they are studying at a nursing school in Yale, New Haven , Connecticut. I don’t see many American girls in China, actually I dont see many foreign girls at all, but especially not too many American girls. So they seemed more “uptight” to the maybe dodgy conversations that were brought up.

Maybe a couple years ago I would have the same feelings as they did, but these days I am more accustomed to dealing with the various cultures. The Korean girl, Kay, was very sweet and quiet, so she would be shy to say anything too bold. I have gotten to become pretty outspoken, so I would say some rather borderline crazy things. The Dutch, as I have learned so closely from my friend Bas – are much more open. I think its Europeans in general as they are much more relaxed to discuss topics such as drugs, sex, and nudity. Its the way they were their whole life, its so cool to be able to be that open.

So I tweeted (message on twitter) last night that: 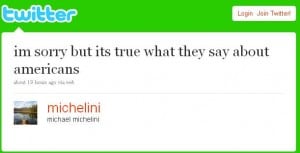 I was chatting to some people on linkedin (sync’d up) about it in private emails, and shared similiar stories. Americans are known to be sheltered, uptight, arrogant, and “they have guns and are cowboys shooting up people on the streets”. I think for the most part, this is true.

But I do support the right to bear arms. I think in China, they only hear about the school shootings and they think its the wild wild west, because its someone with a legal gun going on a rampage shooting everyone.

And the uptight and arrogant….sadly, I kinda have to agree. Of course this is a massive generalization of a population of 300 million people – but for the most part, we Americans make judgements on different cultures without even leaving our own home country. I still have only a limited understanding of Chinese culture, mindset, and logic, and i’ve been submerged here for 2 years! How can my family and friends who have never been here be so opinionated when they have never stepped foot here.

I think the same goes for those other countrymen who never leave their homeland. But its especially true in USA, because its such a large country and many people aren’t able to travel due to time and money (the short 2 week standard vacation is too short to allow people to fly to China for a holiday!!)

So I am fortunate to have been exposed to so many different cultures, it has allowed me to get out of my “shell” and realize there is a lot more out there. But its almost SCARY…and OVERWHELMING, as I cannot keep track of all the feelings, thoughts, and mindsets of so many different people.

Thats why I have to try harder to be patient and respectful…..grr….my weaknesses. But I feel I am learning.

Get A Job in China: Work With Us in Our Tech Startup

But Mike, You Cannot Live Like Them, You Were Not Born Chinese