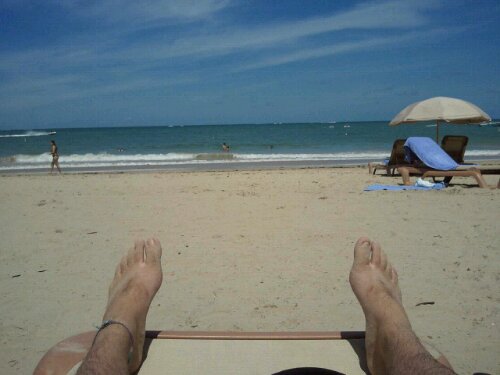 Talk about a life in a fishbowl – a global fishbowl! I’m hustling and running from country to country, state to state….its exhausting. Wifi is non-existent (or out of my price range, sorry not paying for wifi in hotels), and blogging as I can as I setup my new Samsung Galaxy S mobile phone (tethering the internet to my laptop seems to be banned by my mobile carrier, T-mobile) – installing apps and trying to work as much as I can off my phone.

As I’m traveling I am obviously OVERBUDGET. Jeeez man, its hard to control spending when you see so many old friends and celebrate bachelor parties….And when I’m with a group of friends, dinner is always split evenly, rounds of drinks, taxis. I normally live much cheaper – but I think / hope it can calm down with my overextending travel budget now that the bachelor party weekend is over.

This afternoon checked out of the El San Juan hotel with the group, 3 rooms, dividing up costs, fighting with hotel management about costs and non-applied travel rewards points…..I loved the breakfast buffet….missed those eggs, bacon, and coffee buffets! (man, I’m gonna gain weight….) and hustled to the airport, we all had different times and destinations, and my 3:45pm departure wasn’t near anyone else’s flights, so I headed to the airport on my own. I split a cab with a few people (well, I made it happen, jumping in just before they were gonna drive off) – hey I make it happen! Shared taxis both ways

I just keep meeting people, networking in the casino, restaurants, hotels – passing out name cards, talking business, talking travel, getting tips. Its what I do, my friends noticed I’m always talking to some random people, or tweeting on twitter via my mobile phone. It’s the new social world – we are talking about facebook photos, not tagging people, Jerry’s wife was commenting on some of my facebook status updates as we traveled there. Everyone is so wired! Its amazing, mindblowing…..

Did get a chance to see the **************** bio-luminescent lagoon on Friday night **************** the water lights up as you paddle (via kayak) and its really awesome! Tons of drinking and eating….man, kept on eating – as well as time on the beach and poolside. Puerto Rico is EXPENSIVE! It’s the same as being in New York or New Jersey! Obviously its also because we were in the resort, and in tourist areas, but really I think the island all over is comparable to “mainland USA” prices. Just thought things would be cheaper, that was my impression.

Its all about the work / live lifestyle…wish the hotel wifi was more affordable, I just refused to pay, and it hindered my ability to work on Friday as much as I had planned/ wanted. But this mobile internet world…I’m finding more and more mobile apps to get my productivity maximized – online banking via my phone, dropbox to sync my files, contacts, wordpress apps, ebuddy to chat. Its getting wild – I can almost do everything I can do on my laptop on my mobile phone! Just gotta get used to the touchscreen!

So boarding now for Fort Lauderdale …..gonna be amazing to see my family after so many years….crazy….I definitely feel I have changed – though my friends all say I’m exactly the same! Maybe its all in my head.

We Become More of Who We Are Over Time

Is all this Social Networking Really Worthwhile? Its exhausting

Following these 4 Points to be a good father “PCPF”