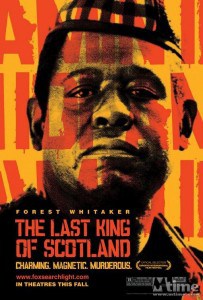 I recently watched the movie “Last King of Scotland” and in a way, I saw a reflection of myself there. The story in the movie is about a 20 something Scottish guy that is not happy with his current direction in life – working in a boring job, living at his parent’s home. He somehow gets word of opportunity in Uganda, Africa. He signs up, and quickly gets involved in something over his head. Randomly, the naive and open minded adventurous “boy” has a one on one discussion with the “self proclaimed” king of Uganda on the road. The Uganda king likes the spirit of the white kid, and takes him under his wing. The white kid becomes his right hand man, his doctor (the kid came there to be a peace keeper) and his trusted advisor.
Stupid white guy goes somewhere without knowing anything before – sure its great to keep an open mind and be open for a life of adventure…but he became the “white monkey” of the king. He was blinded to the massacres this king was implementing all over the country and was protecting him – taking care of him – and helping this king stay safe and strong. Later in the movie, this stupid white kid realizes what he has been doing – protecting an insane warlord – and then tries to assassinate him…..but is caught, failing miserably – tortured and almost killed if he didn’t luck out in a “movie style ending” – I probably told too much, but won’t say how it exactly ends so you can watch it and enjoy.
But then connecting this to my situation – Should i gave gotten job here first? Should I have studied Chinese more, learned the culture more? I don’t think China is nearly as insane and dangerous as Uganda would be (but would be cool to travel there one day and check it out), but in a way, I have to realize I am in a foreign country, with a different culture and mindset. I keep trying to remind myself that. And to adapt, and be flexible, and play by the local rules rather then taking American rules and mindset and implementing it here (I really don’t think that works).

But then again, I have said it before….these few years I’ve been completely submerged here in China – only going home to USA in June 2008! These were the building blocks…..and I can’t look back. now I am educated, experienced, and have paid my dues.

But if I were to advise someone else to enter a foreign market – going any way – from USA to China, or China to USA, or UK to Africa, I am still not completely convinced what I would advise. Maybe like what many I know here in China do, become an English teacher. Or some type of volunteer. I guess that is what this white boy did in the movie “last king of scotland” – and he quickly moved into political seats. Maybe his mistake was being too open minded, not paying more attention to the big picture, getting caught up with becoming an advisor to the self proclaimed king.

So maybe if I were to do this again, I would become an ENGLISH TEACHER FIRST? But that is what all the white people in China seem to do…every one I meet is that. And you know what, I think its hard to transition out of being a teacher here. Almost become in a daily routine, get your paycheck, have your friends, can make a decent paycheck for the local cost of living. Would I then be able to transition from an English teacher into a businessman? Of course anything is possible but I still think the way I did it was my best option. Just jump in head first, expect to make mistakes, learn, and keep moving forward.

Else you will never move forward.

We Just Have to Let Go – Resist Resistance

Pushing It – Aiming For a Quick BootUP! Weekend, Build a startup in 54 hours!