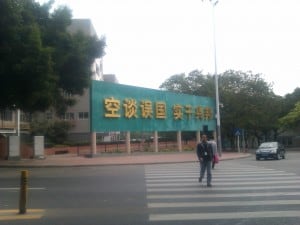 In English, it roughly means – Empty talks would lead the country astray, and hard work can rejuvenate the nation, stop impractical arguments. When I read it the first time (from the billboard) I interpreted it as meaning “don’t say you’re going to do something and not do it, else it hurts all of us”. And then I take the meaning even further to think maybe its a marketing message for Chinese businesses (especially manufacturers doing export) not to cheat their customers, do what they say they will do, and fulfill their promises, else future business will be lost for the whole country.

Maybe I am not exactly right, and the other day I posted it on my weibo.com/michelini. I enjoy using Sina Weibo to post some “thought provoking” photos I come across in China and getting my Weibo friend’s perspectives. I even sometimes use it for “real time crowdsourcing” translation when I’m traveling alone in China and can’t figure out an advertisement or sign. So many users on it, and all wired on their mobile phones looking for new topics and weibo messages to interact with. Really believe Chinese people are a talkative and curious group of people.

鄭君才：回复@michelini:More info will be given after work tonight, it originates from 300 years ago and it is Deng Xiao ping who said it when he visited south China in 1992. (12月9日 13:46)

鄭君才：Empty talks would lead the country astray, and hard work can rejuvenate the nation. This quotation originates from 300 years ago. (12月9日 13:27)
删除| 回复

And this latest one I got an awesome follow through from 鄭君才 (Jayci Zheng), even got an email later in the day with the history of this saying:

The brief intro of the quotation has been included in the attached file, please check.

The Chinese words in the picture is 空谈误国, 实干兴邦. (Chinese Pinyin: Kong Tan Wu Guo,
Shi Gan Xing Bang). It’ originates from an ancient idiom 清谈误国 (Chinese Pinyin: Qing Tan
Wu Guo, English: Empty talks would lead the country astray). In Chinese, 空(kong) and 清(qing)
share the same meaning of empty, and of course they both have other meaning respectively.

In Wei and Jin Dynasty 300 years ago, writers, celebrities and other people in upper class are
gathering to talk about the philosophical issues such as live and death, nature and etc on Zhou
Yi, Zhuang Zi and Lao Zi , but these talks or discussions are irrelevant to people’s livelihood
in society, resulting the urgent and practical problems unresolved and the whole country
undeveloped. This is how 清谈误国 (Chinese Pinyin: Qing Tan Wu Guo. English: Empty talks
would lead the country astray) comes from.

In 1980s, Shenzhen is planned to be the experimental field of Chinese Reform and Opening up.
On 18th Jan, 1992, Deng Xiao Pin, the general designer of Chinese Reform and Opening up, paid a
visit to Han Kou in Hu Bei Province during his South China tour . “空谈误国，实干兴邦，不要
再进行所谓的争论了”, he said in a meeting, which means “Empty talks would lead the country
astray, and hard work can rejuvenate the nation, stop impractical arguments”.

So now it makes even more sense to me that this sign is in Shekou district of Shenzhen City! That is where Deng Xiao Ping came to open up China, as well as turn Shenzhen from a fisherman’s town into a massive trading and financial capital of China!

Learn, share, expose. I hope this blog post helped out…the sign is for not only foreigners, but Chinese to Chinese who get cheated by one another.

Presenting at Shenzhen’s 2nd Startup Tuesday, how to start a startup

Bai Jiu & Ducks in the Road

I’m not crazy – look at apple iphone costs in shenzhen