The 20th anniversary of Tiananmen massacre on June 4th is approaching, so it seems the Chinese government is adding more to the blocked list. My favorite new site, Twitter, has been blocked, as well as hotmail, the new search engine bing (microsoft), flickr, wordpress, and probably more we cannot find now. That adds to the list of blogger, youtube.

I noticed it a few hours ago trying to access twitter…and it was working here maybe 7 hours ago, as I was using it in the office earlier.

Luckily I have a way around the great firewall, but I have to pay extra money for it, as well as its a tedious workaround. I’m trying to upload images on my wordpress blog, but keep getting errors, will try later with my workaround, but too tired to do it now. unbelievable….but yahoo and google still work, so what is this preventing? maybe those are next. Guess the internet needs to be controlled by the government here, and we need to seek approval for any information posted. hope this blog isn’t next…. 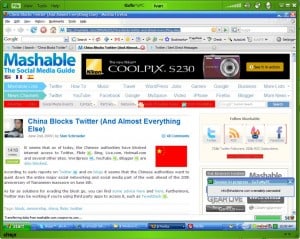 help, China blocked me in a box! 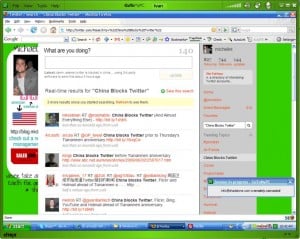 Considering Futian District Coworking / Incubator (Am I a Realtor Now?!)

Passion and emotions in the workplace – good or bad