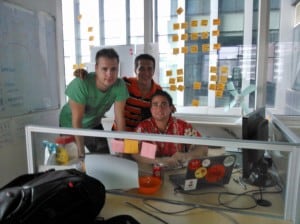 Always tempted to blog (used to blog almost every day, or at least every other day) but at least for the duration of this Chinaccelerator program I am going to blog less often – so that I can focus on product development for Weibo Agent.

Its a rainy, and cool Saturday morning as I type this. I slept about 12 hours (9pm Friday night to 9am this morning) and am re-freshed and ready to work all weekend! To start my work weekend, I thought I would blog and reflect and share.

As any startup entrepreneur would admit (maybe they will deny it), its an emotional rollercoaster, one day you are getting tons of awesome feedback, customers, investors, market feedback – and the next day something break, something is declined, etc. The key is to stay dedicated, and to believe in yourself. This program has been amazing just in the fact that I am surrounded with others going through the same issues as I am. Entrepreneurship is a lonely life.

Those of you following my blog (my life…) I headed up to Beijing late last week – with the primary reason of meeting Sina Weibo about API access and getting some relationship formed. I also wanted to meet mentors, potential customers / users, and angel investors I had been talking to.

Being on a limited startup budget, I took the 11 hour train ride overnight. My friend met me at the train station and one of the more annoying things is to change + shower in the morning on arrival. Lucky I have great friends in Beijing to take care of me – being on my startup budget I was able to stay over friend’s places and cut costs on hotels the days I was in town.

Thursday afternoon, after arriving in Beijing train station, I visited some Chinese startup tech companies and was getting an idea of costs for a startup business in Beijing. There definitely are tons of new tech companies there and I have to agree its the startup center of China for sure right now.

Thursday night I met my awesome friend and mentor Gao Xing, he has been working in strategic consulting for years both in China and USA. He overwhelms me with feedback over dinner and more. 3 hours at least! Take as much notes as I can and keep an open mind.

Friday was Sina Weibo office visit! 3 hours in total, starting at their office, then lunch, cafe, and then back to their office for a tour. They asked me a lot of questions about my startup, what I will do with the Sina Weibo API, went through their functions and I may be able to cross promote in their app market. They want to be more open with their API, but of course, its a mix of business and political reasons that slow down the process.

Friday I also got notice I was accepted to pitch to an Angel Investor network on Tuesday night for Weibo Agent! Sweet, I was lucky to have already been in Beijing, was planning to get back to Dalian sooner – but extended my train ticket a few days….

Friday night another dinner w/ Gao Xing and his IT friends as Xing knows my weakness is in IT. I’ve been learning the code myself now, and breaking it up into pieces to manage it better. But I still need a deep IT backend developer who is not just after money and salary, but in it to win it long term! He introduced me to some nice developers who are based in Beijing and have experience in APIs and big data. Leveraging and growing my network. He also let me borrow his suit for my pitch on Tuesday (I didn’t bring a suit w/ me to Beijing…or Dalian….) We also went through the parts of the pitch deck that this Angel network had asked me to prepare. His M&A experience and powerpoint skills helped me understand what investors are looking for and what to prepare.

Up early on Saturday to the Chinese Internet + Project management conference. I was able to meet David Song (Song Wei) who is the co-founder of Great Wall Club, again, and he was one of the kickoff speakers of the seminar. Just more business development and networking – in a 100% chinese conference. Literally, all Chinese people, all Chinese language, not a single foreigner. Saturday was invited to the VIP dinner and networking event, trading namecards with government officials and toasting wine.

Monday I was speaker on Social media + SEO integration at this Chinese conference. About a 50 minute talk – not many questions.

I was a bit disappointed, there used to be more foreigners at these conferences, and each year it seems like its less and less “international” and more pure Chinese meetings.

Maybe that is fine, but…I just feel like, China feels like they don’t need the rest of the world. And with my startup, Weibo Agent, and what I’ve been trying to do for …I dont know, 5 years, is to bridge China and the world, or at least USA. Its such a struggle, and I am just feeling like its getting harder rather than easier over time. China is becoming even more sheltered, a 100% independent market that isn’t interested to know the rest of the world.

Monday night met my good friend Allen Qu from Netconcepts and had dinner. He is really happy to see me back in Beijing and hopes I can base here after the Chinaccelerator program. Its a big decision for me to make.

I had cancelled my Monday train ticket and instead bought a plane ticket Tuesday night, 12:20am departure, landing back in Dalian 2am. Just needed to get back to Dalian, went into Chinaccelerator to stay in 1 place and work, and build, and grow.

Tuesday was scrambling to prepare for the Angel network pitch that night. Getting various feedback from mentors, friends, in USA and in China. So many conflicting ideas on how to best prepare the powerpoint. I had a skype call with Chinaccelerator mentor Bill Liao (co-founder of Xing) and he gave me a totally different perspective on how to pitch, to make a story instead of a boring business plan.

Gold is hidden in the weibo mountains. —- PAUSE (show slide of weibo + a little gold pots — Our 15 years of business in China + social media will unlock that gold. Gold is hidden in the long tail, while everyone tries to scale the peaks of the most popular, our tool finds the gold hidden in the potential influencers and leads of people relevant to your business.

And then I had a call right after that (mind you, 1 hour before I went in to pitch, while I’m downstairs at a coffee shop) and this mentor had been my sponsor to the angel network, and said that pitch is “too Chinese” and to instead be myself, and be real, and talk to them like normal people.

Went in to the Angel network to pitch, wearing Gao Xing’s suit, with photocopies of the powerpoint presentation (8 paper copies) that my friends helped print at their offices, and was ready to rock it!

The 10 minute pitch with Q&A was over, and I got a lot of intense feedback, wrote it all down afterwards and it will help me in my business a lot. Rushed off to the airport with Andrew from another Chinaccelerator team, and Chad who was another startup that happened to also live in Dalian. Arriving at the airport, we shared startup stories and experiences and arrived at the airport for our post-midnight flight.

Arriving at 2am to Dalian, we shared a cab back to our respective homes, and I finally was able to crash around 3am after a rollercoaster ride in Beijing.

Wednesday morning, 7am concrete drilling starts in my building, they are installing heating pipes to prepare for the coming winter. In and out of sleep, I finally head to Chinaccelerator office around 10am. I am preparing for a few visitors these next couple days.

Steve Forte, came up from Hong Kong to visit the incubator and his first visit here. He has been an awesome advisor and I was excited he had come to visit (just wish it wasn’t the next day after arriving 3am from an exhausting Beijing “rumble”)

Steve and Paul Orlando (@Porlando) rocked at Chinaccelerator meeting the teams, Steve spoke on how to get VC funding and overall pumped up the team’s excitement!

Later on Wednesday night, Chris Gormley and Marshall Taplits, my 2 good friends in Shenzhen doing startups of their own, came up to Dalian to visit (the blog photo) and gave me more support and feedback.

Everyone was in town til Friday and I spent a lot of time with these awesome business friends and mentors. Trying my best to stay positive, stay AWAKE (freaking exhausted!), and ride that entrepreneur’s emotional rollercoaster!

I’m feeling so much better this Saturday morning, got a haircut last night, took some medicine, and slept from 9pm like a baby til the next morning!

If it were easy, everyone would do it.

My Kids Are Speaking More Chinese Than Me, already!

Welcome Back after Chinese New Years! Ready to Rock!