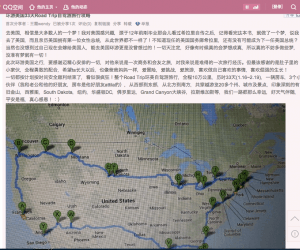 I’m still recovering from jet lag and just pure exhaustion from the 33 day USA roadtrip – back in China now for a bit over a week. And my wife Wangxia (Wendy) spent each day making a daily dairy (in Chinese) and has finally compiled and released it.

She sent it to me this Sunday afternoon and I had to Google translate it. I am truly amazed to see her reactions and bullet points below, and since I have to translate it to fully digest it – of course I feel its worth sharing here on my own blog!

I used Google translate to get it started, but then “human” translated to get rid of the Chinglish:

To visit the United States of America, I believe that is a dream for most people! After college I became interested in American culture, and having graduated from school 12 years ago, I still remember reading the book Hillary autobiography. I had a dream that when I went to the United States, they will have witnessed their first woman President , and the world would not be the same ! Can the current U.S. Secretary of State Hillary Clinton become the next U.S. president ? Of course, I did not expect to marry an American, and be able to travel around the United States – the thought had never even crossed my mind! All the heavens, sometimes really like a dream come true, and there might be more dreams to come true, chances are that you too have a dream, that is everything!

So this trip around U.S. , thanks to all step carefully arranged by Mike and his friend Attila – both a personal and business trip for me, this trip is such a rare experience . But the most grateful is the baby growing in my belly, with a brave hope to grow up, just like mom and dad, to love adventure, to love challenges , to love to travel, doing something you enjoy – it is like a stubborn growth!

Everything went according to plan safe and smooth by the end of the trip seemed to be crazy! Road Trip through America travel by car , an entire 10,000 km , which lasted 33 days ( Jan 16 to Feb 19 ) , a van, three small partner ( my husband and his friend Attila , this little RV) , from west to east coast , from north to south, crossing more than 20 states, cities and attractions , the impressive places such as San Francisco, Seattle , South Dakota, New York, Washington DC, Florida , Grand Canyon , Las Vegas etc. , the way we are so lucky , good weather accompanied, really so grateful ! 🙂

A lot of my friends asked me how it felt to go to the United States? I can only say that this trip to travel around the United States, from the geographical and cultural , have a preliminary understanding , the United States , is about 9,629,000 square kilometers of land area, 50 states, only one of our population a fraction of the more than 300 million , before watching the gap between China and the U.S. reported that 100 years , we want to go into the year of 2080 for China to be considered a developed country. I really appreciate the difference, but did not think the gap is so big, from the life of infrastructure, we are building the building, every family has a car, ease of travel in airports, and high-speed rail, I feel the biggest difference is the quality of people , policy and legal system , education, health care system, their money, attitude to work and life.

Some friends asked me if I would choose to live in the United States, and to immigrate which cities, I would choose – so below they are, in order of preference:

Note: Unfortunately we didn’t have a chance to go Los Angeles and San Diego , so I cannot comment.

Tips for Traveling in America by car:

essential items :
a visa credit card – basically all consumer , you can use visa card , unless the street to buy things that Americans rarely with cash consumption
a paper map of the United States ; ( because it is driving, navigation is essential , but there is no signal of individual sections , so the paper map is a must 😉

Google maps– where to go on the trip along with google map , especially in the choice of the road , do not lose the basic run . )

Waze– similar to Figure it ‘s navigation software , the choice of the road can use google map, excursions and more convenient to use waze , the most important is not just navigation, real-time understanding of the situation along the police , the accident congestion , we will use waze share real-time information . )

Reflections of USA vs China Living

Our Itinerary of the tour through the United States, cities and attractions

In China 5 kinds of friends

packing for my redeye to NYC