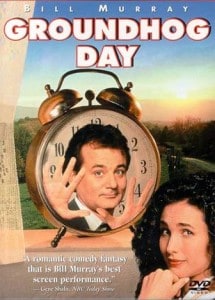 I know I have been doing a lot of “movie reviews” but hey, I’m hanging out at my parent’s house catching up and hanging on the couch with them is bonding. This is another movie that is in VHS cassette version, yup, needed a VCR player. But I have watched this countless times when I was younger, and had to watch it again at this stage in my life.

I say this is another “personality shaping” movie because I believe it left an impression on me. About life, about how serious we need to take it. About what is important and what isn’t. Its hilarious too, I love Bill Murray’s acting and he plays a great role as a sarcastic tv weatherman who is kinda fed up with his current “boring life” and his 4th trip to do a TV report on Groundhog day.

Somehow fate keeps repeating this “HORRIBLE” day for him, forcing him to live it over and over again. UNTIL HE GETS IT RIGHT – that’s the idea of it. He hates his life so much at the beginning, after he keeps repeating his day over and over, at first he gets more depressed….learning he can commit suicide, rob people, seduce women, eat anything he wants – he has fun for a bit.

Then he realizes what is the point of doing this?

But then he gets even dark, giving up….playing card games by himself, just living pointlessly.

Then he realizes, why can’t he save others on that day – there are bums dying around him, kids falling out of trees, mayor choking on steak, old women with flat tires. He also learns the piano, to ice sculpt. At first its to impress his new, cute producer, Rita…but then actually enjoys it – for HIMSELF. And when he actually does it for himself, and helps people without expecting anything in return, is when he gets the girl, wins friendship with everyone in town, and gets out of the repetitive daily repeat! Definitely recommend watching this if you haven’t, and if you have, watch it again!

So why is this personality shaping? I guess because it teaches me / us to JUST LET GO and live life. He gives his pocket money to the bum, he saves the kid falling out of the tree, he lights people’s cigarettes, saves a choking major. BECAUSE YOU KNOW WHAT, why not? Isn’t that what life is meant to live for?

Because when we die, what do we take with us? Its what other people look back and remember us for, and how we lived the life we had.

The Road Not Taken – Inspirational Poem

sometimes I cry – can a man cry?