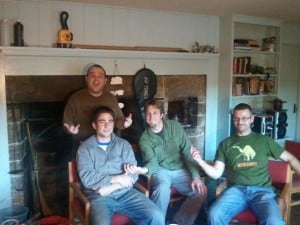 After Florida, took a couple days back in New York for meetings and business. Its been exhausting to catch up with everyone, thinking how dispersed life has become, as I meet more people, as more people move, as I move around, I meet more people – I have so many more places to “Return to”. But it was great to make it back to Connecticut, Andrew picked me up in NYC saturday afternoon, and drove up to Brian’s new house in Willimantic, Connecticut. Jeez, it was like 3 hours in the car, but anyway got to catch up with Andrew on the ride. Brian has purchased land way up there in this small town Willimantic, it is very peaceful – but I am personally more of a “city slicker” , but hanging out in the woods is a nice getaway. More people were supposed to stop by (per the facebook event) but it was a rather remote area that doesn’t show up correctly on GPS! 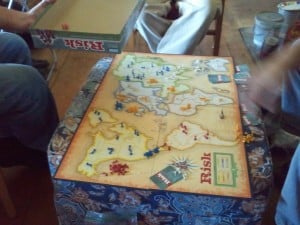 It was cool to catch up with my friends I grew up with. Man, we are getting OLD! Talking about old crazy stories, tail gating at Dave Matthews, house parties, school teachers. Memory lane. And like we had done since we had all remembered, maybe 6th grade it started, we played a game of RISK – the game of global domination. This game has had a lot of history with all of us, some take it more serious then others (normally Brian and I are most “passionate” about the game and the strategy) In a way, we are all still “kids” and a bit immature when we all get together. I guess its how we know each other, and therefore our childhood is our connection. Sure the rest of the crew hangs out more when I’m away, and I’m not sure if they act the same way together with or without me. Its just great to see them after so long, and getting together seems like nothing has changed and we still know each other so well. 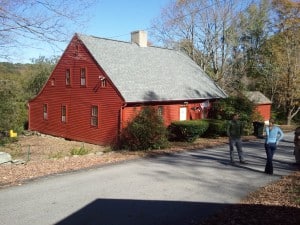 Risk game ended at 3am to be re-continued around 10 am the next day. Hiking around Brian’s new house and land – its massive amount of acres and he is still determining where the “dividing line” between his land and his distant neighbors. Deer tracks were all over, maybe Brian can hunt on his “LAND” at some point in the future, its like another world.

We (my hometown friends) didn’t grow up this far in the woods, we grew up in Hartford, Connecticut, a rather smaller city, more like suburb, and had neighbors, multi-level houses. But Brian said this years ago, and he actually did it. So cool to have so much land, have a photo of the main house here to the left.

Wish I could spend more time in Connecticut, wanted to see my Uncle Bill, and go to a Boy Scout meeting, but moving down to NYC and doing business there – attending an SEO internet conference Tuesday and Wednesday, gotta “hustle” (yes MikeMo, that one is for you)

Sunday night here, sitting at Andrew’s apartment in New Britain, both on our laptops, watching sunday night football, feels like a few years ago all over again. Great that I can come back to my home and talk to my friends like nothing has changed.

Turn My Kids into Youtubers?

Attention – I’m not always on vacation!

Settling Back In China, My Long Term “Home”?