Happy Sunday morning! Sneaking some time away from family this morning to update about the newest addition to my home here in Shenzhen – my mother in law moved in last Sunday. She came down from Shenyang and we have been discussing this for months.

After Miles was born, a lot of the family went back to hometown, leaving my father in law, Miles, Wendy, and I at home here in Shenzhen. It has been a lot of work for Mr Wang (my father in law) to stay at home since Wendy went back to work in April and I’m out at the office as well. When he went to hometown for Chinese New Year he really had trouble coming back to Shenzhen as his wife and family was there.

But we had to get him back down here- Miles really loves his grandfather! The first couple days after Mr Wang left our home in Feb, Miles was looking everywhere in the house for him. We took him to his bedroom and no one was there, I sat in grandpa’s chair where he would regularly hold Miles and the baby really was in shock looking for grandpa.

So we had to get him back, and part of the deal was we’d get grandma down too eventually.

So things have worked out and grandpa is happy and Miles is happy. One big family.

Mrs Wang has a lot of energy! Up late and up early in the morning, she is very vocal with Miles and challenging him to speak more and learn more and more. She also has a acupuncture business back in hometown Shenyang that she has paused while she is down in Shenzhen. It compliments grandpa, who is very calm and quiet – and they take Miles out for his morning and afternoon walks while Wendy and I are out hustling in our careers.

I like to have the grandparents watching over Miles rather then paying an expensive daycare who no matter how much you pay will not care as much for your kid as the grandparents. But at the same time I worry they love him too much, he has so much attention all day. But really I feel he is learning so fast and walking around everywhere, speaking a lot more (about six words now, all in Chinese), and playing with toys that seem to be for older kids.

On Saturdays I take Miles to the pool and he is swimming! Kicking his hands and feet not at all scared of the water – to the awe and amazement of the other parents who are shocked he is only a bit over one year old.

Since the beginning of this year I have been studying Chinese for thirty minutes every morning which has helped. But now with a house full of Chinese family who has no understanding of English beyond “hello” I am forced to practice what I study.

I’m also in the italki language challenge and have regular Skype sessions with Chinese tutors online. I’m focusing on learning “life and family” words and sentences as I study now and it is pretty cool to be able to use what I learn and apply it in real life at my own home instantaneously! Literally I’m learning on Skype in one room, after the call I go to the kitchen and practice it. Trying hard to write it down as I speak it- in both pinyin and Chinese characters. 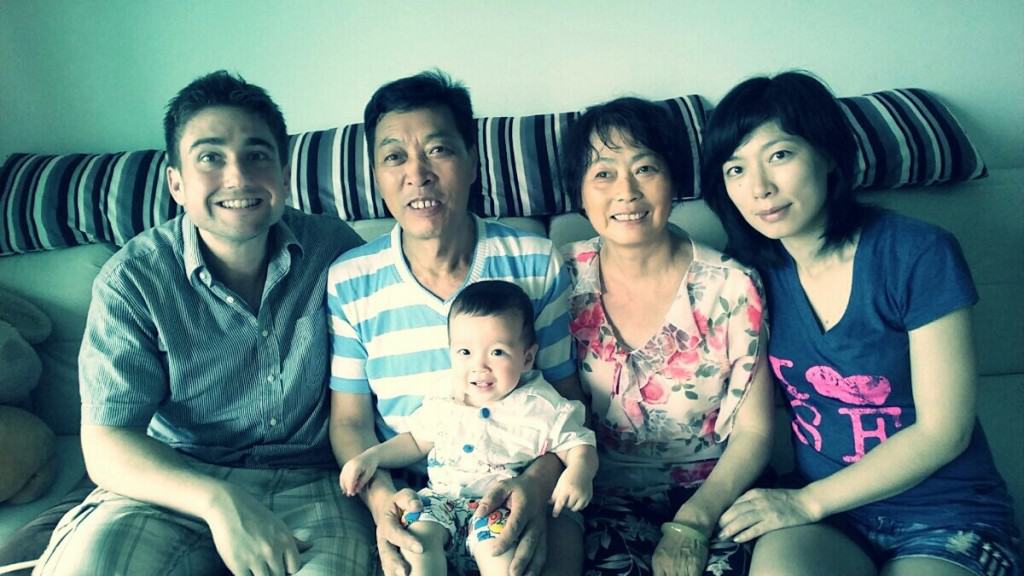 Miles Will Have A Diverse Upbringing

I always look at my son and think how he will grow up – so differently than I did. Its scary and exciting at the same time. I’ll be in USA in September for about a month, preparing for that now. But most of his life he will be in China mostly with Chinese people. I am the foreigner in the family and it is such a strange feeling. I’m told to only speak English to him, but in a family dinner table environment where everyone is speaking Chinese, how can I only speak English to him? People say it is good he has an “English channel” so that when he hears and speaks to me, he will know English. But isn’t that confusing he will hear my speak Chinese to the rest of the family, but when I address him I will speak in English?

Going to take it as it comes. I love him so much, and I am trying my best to give him the best opportunities. I always tell myself, I think it is much harder to learn Chinese than English and if I had the choice when I was growing up, I would learn Chinese first in a complete submersion environment. I’m sure he will pick up English fairly easily and the days he is out with daddy, he will be fully submersed in English environment with him.

Mostly I don’t want him to feel too much pressure and to grow up as the man he is meant to be and wants to be.

Adjusting to Life After Quarantine: Getting a Haircut in Shenyang City

Taking This Photo Made Me Think Of My Childhood