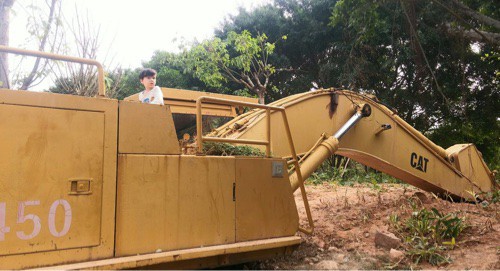 Walking around a local park in Shenzhen, China on New Years Day with the family – what could be cooler? Having a flashback of your own childhood during the walk.

And that is what happened – there is a construction area at the park where they buried the crane instead of moving it – guessing its for kids to play on…or something?

Seeing it sparked the idea to have my kid run up on top of it – like I did when I was a kid.

Not sure about you, but I have a few memories that almost seem like yesterday – one being a visit to one of my dad’s construction sites in West Hartford, Connecticut. I think they were making a new bridge or road next to the main road, and it was all dug up. Tommasso group was the construction contractor that won the job – my dad was talking about how they always underbid other contractors. There was a bunch of tractors, cranes, and of course a big bulldozer.

I was heaved up on top of the big bulldozer and had a photo snapped. I blog a memory and photo from that here. Remember going to Dunkin Donuts after and smelling the coffee and picking a donut or two from the shop window. There was a big willow tree down the slope as well, that must have been there for a hundred years or so (from the story my dad and his friends were telling me).

As a father now, I appreciate those memories and hope Miles can “bake this positivity” into his daily mindset. It is these small things, these random things we run into on a daily basis that we need to appreciate.

This is what I have found out being a father / parent – you get to relive your own childhood memories as your kid does. Don’t want to influence him too much and let him live his own life – but these small daily exposures will help shape him and I can’t wait to see him grow up.

But on the other side of the coin, I know he will grow up and move out of the house – like I did – and that is going to be hard. But my job as a parent is to give him a good environment to develop himself as a human being, to learn, to feel safe, and find his own way.

My Son Is a Budding Artist

Launching Something Special on My Birthday