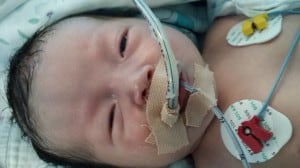 I’ve been unusually quiet on this blog, I have been waiting for the right time to post an update – as just about 4 days ago I become a father to a newly born baby, Miles.  I shared the joy on my social media as soon as he was born, but sadly it has been a complicated delivery and he has an infection in his lungs – I have yet to hold him, and he is currently in an ICU in Shenzhen Children’s hospital as I write this.  Would like to sugar coat it – but honestly this is one of the scariest and most anxious times in my life.

But I need to stay strong, stay positive.  Miles is a strong baby, and will make it through this.

Of course I have thought about all the things maybe that I should have done – maybe I shouldn’t have had the child in a small local hospital in China.  I had mixed recommendations – but then again, I had my wife and her family here – would have been hard for them to do this in Hong Kong or overseas.  All the maybes, the what ifs, run through your mind.

The most frustrating is that fact that the Chinese hospital doesn’t seem as willing and open to share the status updates.  I went in an ambulance Monday morning from the local Shekou hospital to the biggest Children’s hospital in Shenzhen city – and they quickly rushed him into the back room and seemed not willing  / able to share information.


It was so frustrating, and even after calling in the afternoon, they wouldn’t talk.  I had to escalate it and call the US embassy in both Hong Kong, and then re-directed to Guangzhou.  They asked me to send it in writing , and I wrote up this clear story below that I am comfortable to share here as well:

I just called a few moments ago and was told to write a clear email about the situation.

I’m an American citizen living and working in Shenzhen, China.  I am married to a mainland chinese wife and sunday morning we had a baby boy in Shekou hospital.

During delivery, the baby did not cry and/or cough up the water and other materials form delivery, so the doctors put him on special attention on a different floor from where my wife and I were stationed.  We were able to see the baby and my wife’s aunt watched over him.

They were considering putting antibiotics but decided to instead take blood test and closely monitor the baby.

After a little over 24 hours (26 hours to be exact) my wife and I were awoken by her aunt that the baby was no longer breathing on his own and we had to transfer him to an ICU to have it escalated.

The shekou hospital was not sure if it was an underdeveloped lung or an infection.

My wife stayed at the Shekou hospital, but my father in law, aunt in law, and I got into the ambulance with our baby and the nurses from the ICU and drove about 1 hour to the Shenzhen Children’s hospital near the Children’s place metro in Futian district.  That was 9am yesterday.

After paying the fees and the baby was admitted, we were able to see him behind a glass wall and that he was in an incubator and that we could call later for a status.

So we were told everything was being taken care of and that we can no longer do anything and to go home and get rest.

We went back to Shekou hospital and checked out my wife and took her home.

Later in the afternoon yesterday we called the Shenzhen Children’s hospital but they said our doctor on the case only works morning and to call in the morning (today), and there is nothing else we can do.

This morning we called many times, 8:30am onwards.  Consistently the Doctor said that she was too busy today to talk.  On the 3rd try, she finally said that the problem is:

The baby has an infection, the lungs are fully developed – and that the shekou hospital mis-diagnosed the baby – so for 24 hours the baby was not on antibiotics and should of been – but now he is on antibiotics

But they said it is a turn for the worse – as the baby is now needing a bigger machine for assisted breathing and isn’t breathing.   They said they cannot determine if its an infection in the respiratory track or the lungs.  (but Hong Kong doctors told us an X-ray can determine that)

But they will not tell us what medicine they are giving the baby, or if there are fluids in the baby.  They said we can go tomorrow at 9am, and there is nothing else we can do until tomorrow morning.

We are very concerned and want the doctor and/or hospital to give us more details of the full situation.  We have tried to ask other doctors who are our friends in Hong Kong and USA – but they need more information.

I am extremely frustrated with the lack of communication – it is my wife, the mother of the baby calling the hospital but they refuse to give more information.

My wife says “this is China”, and she says she doesn’t want me to escalate this as she is afraid then the doctors will not pay as much attention to the baby as we are too troublesome.  She says this isn’t America, and that we need to do things the Chinese way.

I am extremely afraid to hear this and lost on what to do. 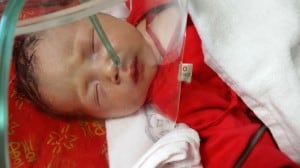 I was looking into 2 options from the US Embassy

2) Escalate the urgency for the hospital to give me and my wife the information we needed about our newly born son.

The embassy called me back the next morning, I was in the ICU at the time, and had finally been allowed to schedule a session with the doctor.  My family and friends had helped me make a list of questions to ask the doctor such as:

Questions we have asked the doctor:

1.  What medications (drugs) are being given and at what doses?

2. Has the infectious organism been identified or cultured?  What is it?  Group B Strep?

4. Provide reports and images if possible from radiology (x-ray) studies.

The doctor fully complied, and gave us the blood tests, the X-rays from the first day and 3rd day, and all kinds of information.  I took photos and synced to dropbox real time from the hospital and sent it out to a few doctors to review.

Currently getting feedback on the reports, but it has been identified to be a lung infection – not pneumonia, not underdeveloped lungs – and it needs to be treated over time with antibiotics.

The Shenzhen, China hospital says it will take 1-2 weeks in the ICU to get over this infection.  I’m currently checking into the medication they gave the kid, and seeing if we can upgrade / change the medication based on other doctor’s feedback.

i’ll keep everyone posted – this has been one of the most painful weeks I have been through – mainly because I feel so helpless.

But Miles will pull through, and he will be an amazing human being who will appreciate life on this earth. 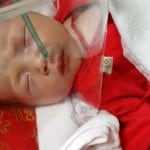 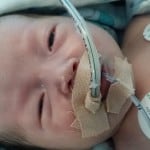 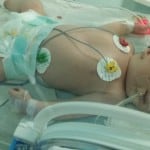 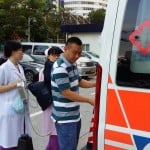 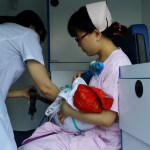 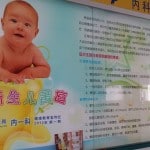 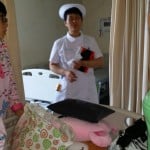 Grandpa is Back in Thailand!

My Son Is Deep into Meditation

Ready for Takeoff and Leaving Wife Behind?