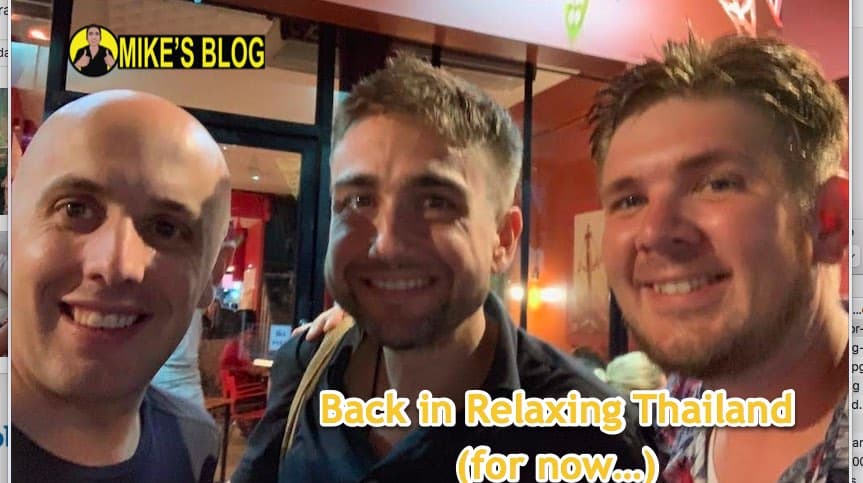 Back in relaxing Chiang Mai.

Going through Hong Kong airport now feels like a war zone in a way. Water barricades up everywhere, security, police, student volunteers explaining to passengers you need to show your boarding pass in order to enter the airport.

Sad, such an organized and top class part of the world is under such huge pressure. I was able to slip through as a press/media one time entering the airport (my big vlog camera helps) as I was just too lazy to try to show on my mobile phone a flight ticket. But returning back (after a meeting at the HK airport hotel 999) the press/media claim didn’t work. I had to show my passport, my flight details (which actually was the blog post on Mike’s blog – I didn’t check in online) and then through.

But so scary. I had to put down my bags and dig through my luggage to find my passport etc – I wasn’t ready to have to show all this information before even entering the airport.

Curious how long this will last. Yet at the same time, if you ask me how long this USA / China trade war will last – I think we are talking about a decade or more. The “cold” trade war is beginning, and as some articles I have read, it will be the slow decoupling of the long term trading between the 2 world super powers.

Landing back in Chiang Mai, Thailand – kind of a sigh of relief. The tense and the pressure in South China is in the air.

Then again, how stable is Thailand? Government things here boiling too, but it isn’t on the global headlines as much as the Hong Kong tragedy.

Where is safe in today’s world? Or maybe it has always been like this, and I never saw it?

NO, I’d say times are changing and the world is becoming less open and friendly. Walls are going up, immigration is getting harder, the opposite of what the internet and e-commerce was supposed to do. The opposite of what I believe is the right way.

Remembering My Late Grandparents and Aunt

If a Tree Fell + No One Was There to Hear It Fall….

Will I Live in China For The Rest of My Life?