At my parent’s house and looked through the DVD collection, finding a classic and favorite of mine – “Rudy” – to inspire me this Sunday evening in Florida. Just been an overwhelming time for me going between all these countries and business developments, etc….just have to take a couple hours and get some motivational movies in.

Rudy, the movie, man does it still get me pumped. Here are a few reasons why – definitely watch it if you have the time 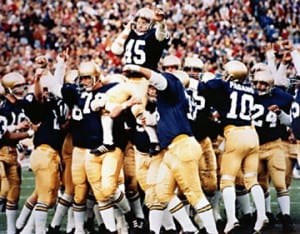 We just have to go for it…..I’m getting a little bit scared lately, hey, I get that a lot….because I am challenging myself, thinking outside the box, taking risks. Wonder what will happen each damn day I wake up. It makes us stronger. And hopefully it motivates you as well!

Grab your copy of the Rudy Movie today!

We Become More of Who We Are Over Time

joys of monday – only 4 left in corporate america

how does everything get done?