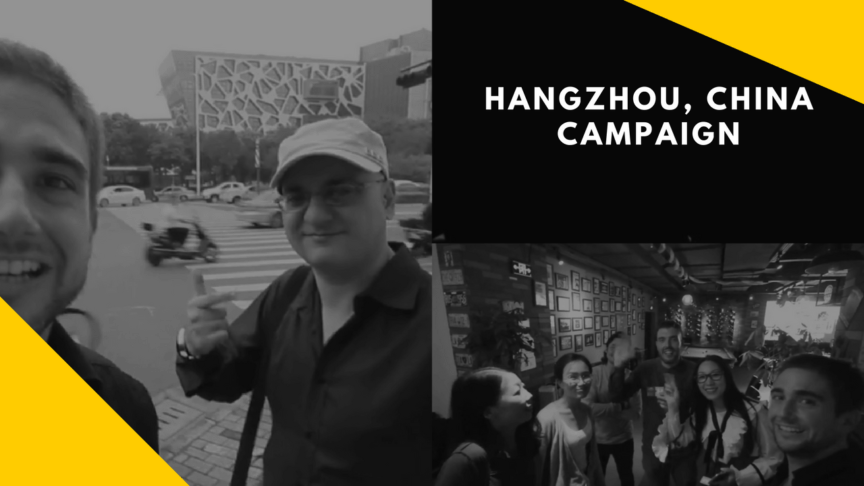 We are here in Hangzhou, China. A city not as well known as first tier cities such as Shanghai and Beijing – but one we should take note of. I’ve been fortunate enough to have gotten to know Lorenzo a lot more while he was down in Shenzhen earlier this year. He had lived in Hangzhou for a year and then came to SZ for a 6 month project and now returned back to Hangzhou.

While he was in Shenzhen he got to attend our Cross Border Summit conference as well as some of our GFA Meetups and was loving it! So much so that he has become our chapter leader here in Hangzhou city and has now done 2 meetups already. The first was in August, and the second was just completed (and partially recorded in this video blog). He had asked me to come up in August – but now since I was in Shanghai how could I possibly skip out on a train ride over (about 45 minutes) from Shanghai and head on over to Hangzhou to check out the scene.

It is a very relaxed city, a coffee shop style place. The taxis (I take a bunch of taxis on these trips) have been pleasantly more patient with my lost foreigner self, and accommodating to u-turn and other helpful moves.

Wish I could spend more time here, literally came on Sunday morning by train and flew out on Monday afternoon. The goal – see what Lorenzo has been raving about here in Hangzhou, speak at our second meetup for GFA Hangzhou, and then take a tour of Alibaba’s campus. Writing this up as I grab a quick breakfast and then will be visiting the Alibaba company and then rushing off to the airport.

All this traveling has made me think of my “younger days” when it was more fun. It is true what they say about getting older, traveling isn’t as much fun. I just want to get back home and hang out with my kids already!

Hangzhou is a cool city, feels much more relaxed and laid back. Clean and patient. And not too far from Shanghai – as well as close to the Yiwu market.

A big update has been during my trip here I made a deal with Lorenzo and added him as a partner on the Para Living Inc Amazon FBA business. He is hustling hard and applied to be part of the program and I had to make the hard decision to not get him a spot. But now that things have gotten more clear and we are figuring out the team, Lorenzo has shown he is a guy who makes things happen, plus I buy into his idea that being here is great as it’s close to Yiwu market.

So expect some things to move fast, let’s all take action and stop making excuses. Stop waiting for tomorrow. Stop waiting for more data, more research, more validation. Get in the arena and be a gladiator – as I am calling now – an e-commerce gladiator.

The Grind and Balance of Business in Asia

October Is Going To Be A Busy Month!

First Week in Thailand & Trip to the Zoo

Still Feel I’m holding myself back