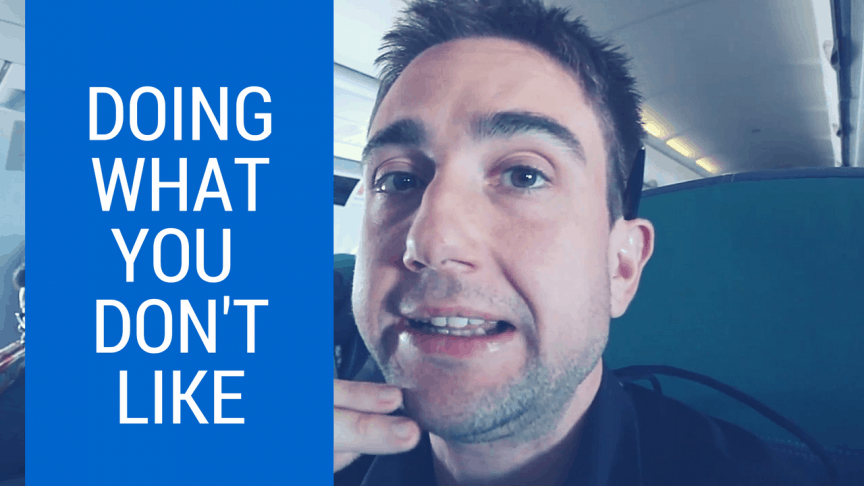 Woke up at 4:30am today – which is early even for me (I’m a 5:30am riser). Set the alarm on my watch (still using a Pebble!) as well as asked the hotel receptionist to call me.

You know that feeling, when you wake up and the sun is on your face and you realize you slept through your alarm and missed your flight. That happened to me once in London back at my Deutsche Bank training days in 2003! I had a morning flight and….had a going away party the night before in the London Underground, let’s just say it was about morning when I came back to my flat. The 2 alarms didn’t work then.

Maybe that is why I still wake up at 3am, 4am, etc to make sure I didn’t miss my flight.

As an “old man” now – I shouldn’t be as worried – but even still – it isn’t just about the worrying about waking up early – it’s also the fact that I work in the morning. Morning routine, writing time, creating time – all done before lunch.

Sure, I can complain about it today – but instead, I thought of the idea in the video to talk about doing things you don’t like to do.

I had to do this 6am departure flight from Cebu to Hong Kong. Why? Because it is the only direct flight between these 2 airports. I have done this in previous trips as well. The idea is to get one night at a hotel right across the street from the airport to maximize the sleep time. Waterfront Hotel and Casino is that hotel here in Cebu. Wake up 1.5 hours before the departure time, have most of my items packed, heat up some tea, and rush out the door.

So we all need to sometimes “suck it up” and do things we don’t normally want to do. We can cry and complain about it, as most fools do, but we’re no fool!

So I had my morning routine prepared in the top of my bag, and did a quick meditation at the waiting area before boarding. Do my Chinese studies on the plane, my writing, and reading.

Just make do with what we have.

But the trick is – to not repetitively do what we don’t like to do.

Going back to the Steve Jobs quote of looking in the mirror every day and asking ourselves if we are doing something we like today or not. And if we repeatedly say no, something has to change.

But he doesn’t say if it happens only 1 day – he says if we say no too many days in a row.

So while I write this on the road back to Shenzhen (through Hong Kong) – I’m still getting at least the bare minimum of my morning routine done. And I try my best not to interrupt my morning sessions too many days in a row.

But it is still more effective than getting a later flight that connects in Manila, with potential flight delays, etc. So we have to make tradeoffs, and make do with the cards we are dealt.

Also had fun on the flight – sat next to a travel agent – Rels – who wants more travel bloggers to come to his resort in Philippines. Made some plans there. Also I always think more strategically on an airplane, reviewing what I did on the trip, planning the next few days.

So lets make it happen. Suck it up when there are those unfortunate times you do something you don’t want to do. But it makes those more enjoyable times that much more enjoyable.

How about you? Do you repeatedly do something you don’t like to do? Something you are dreading? Begging for Friday to come? I’ve been there, believe me, but all I can say is if that is you, do things that will get you closer to doing what you love.

And it most likely won’t be an easy road. It is a journey. And the journey may never end. That is called life! But we should pursue what we love to do, and not fear the consequences.

So Busy In Shanghai…..this city is great

My Son Speaks More Chinese Than Me – Mike’s Blog 029