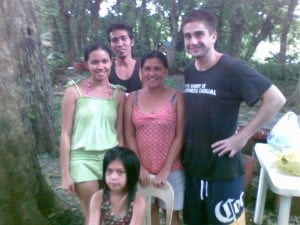 Been back in Philippines now for a few days, in the capital city of Manila where the small startup office we have going is. Yesterday (sunday) Marie invited me to tag along with her family to Eco Park, which is a hangout park that has a public pool and picnic areas. Deep in a forest, its rather tropical, yet feels like a public pool I went to back in USA.

SIDENOTE – On the ride there, I learned my name, Michael – is shortened to KILL (Kell) – the second part of Michael….funny right!

I met Marie’s aunt and 3 brothers. They are visiting Manila (northern part of Philippines) from their hometown of Mindanao. As I “dive” deeper and deeper into culture of the Philippines, I realize how fragmented it is. Each region has its own language, own policies, own major religion. For example, where I am in Philippines, it is mostly Christian – Catholic religion. But in southern Philippines, in Mindanao, it is mostly Muslim. And, there are many tribal wars there in Mindanao, and reports that foreigners (white people, but yes, even Filipinos from outside Mindanao are not safe there) are lost / kidnapped, or murdered. There is a bit of jealousy / hatred in the region of Mindanao towards outsiders (white people) who they feel have suppressed their people, stolen natural resources (oil, for example) for the embetterment of their own countries / people instead of the locals.

The brothers yesterday were there, and I was joking that if I were to go with them, I would die. I joked that I should get a t-shirt that states “I have no money, and no one in my country will pay a ransom“. One of the older brothers, the “stronger” one of the bunch, told me if I go with him there, I will have no problems at all. I do hear it is a beautiful place, natural and lucious landscapes. They told me I could try some shooting ranges to shoot RPGs, ak47 rifles, 45mm handguns, whatever I wanted. Being the “adventurous” (or stupid, depending on your point of view) american tourist, I did consider their offer. Posting on my facebook, I received TONS of feedback saying NOOOOOOOOOOOOOOOOOOOOOOOOO, as below:

Michael Michelini was just invited to take a trip to south philippines – Mindanao – Muslim area that kidnaps or kills white people…..they said they’ll protect me….and teach me how to shoot a gun….

Brian McKeon
dont f*ck with muslims mike, they’re wacko when they get militant

Jonathan Myers
Dude….forget it. You don’t need to put your life at risk to learn how to shoot a gun.

Andrew Moran
you got an extra ticket?

Jason Barco
Andrew would ask 4 an extra ticket.. Lol.. And depending on the size of the gun and how many rounds of ammo they supply u with, that’s how i’d base my answer..

Scott Katin
be sure to take LOTS of pictures.

Nornale Peralta
Don’t do it…even the native people have to get protection!

Hasan Kazmi
LOL!. What is life without a little adventure.
On second thought, stay away.

Jonathan Myers
I have two words to say to you…….Daniel Pearl.

Nelly Paekukui
I don’t know about that one Michael. I would pray if that’s where the Lord wants you to go.

Brian McKeon
just remember mike, bullet proof vests don’t stop 7.62x39mm… course you maybe able to score an AK, and use one on the same vacation…

Michael Michelini
spent a long night with them last night at the bar……yea….more scared to go down there now after certain discussions…..
seems like China again “no problem…..don’t worry……we will take care of you!!!” haha, i guess people in every country say that, right

Steven W. Tabara
Mike, I’m sure you are aware of how quickly a safe situation can turn dangerous once you are on their turf. go with your gut…and trust that your hesitation is Gods way of telling you to stay where you feel safe.

Theresa Depuy
Don’t go and don’t let them get you drunk and talk you into going 🙂 Stay safe!

Steven W. Tabara
Every year, adventurous American tourists are met with trouble while traveling in third-world nations. 5 years ago, while on a business trip to southern India, I cancelled an excursion to Delhi and the Taj Mahal because of reports of suspected terrorist activity near the hotel where I was scheduled to stay. As it turned out, a bomb exploded near … See Morethat hotel on the night I was to stay. This was considered a “safe” area located within the diplomatic compound in New Delhi.
I had a gut feeling…and I’m glad that I cancelled.

Michael Michelini
thanks Steve…..i do want to be that “adventurous american tourist”…..these are 3 muslim brothers that i do believe would protect me……and when else could i get a chance to go… 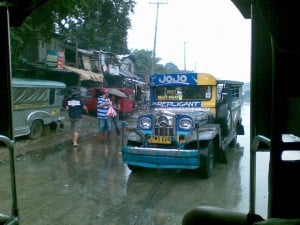 I feel the love on all the concerned feedback I received from this post…..but really….I am still considering it…..I want to experience!

It is really sad to me that so many beautiful places in the world have become warzones. Or dangerous for tourists. Makes you think why. I guess its because previous “invaders” to that land have made the locals no trust visitors…..and their own internal political mess, war, and/or struggles to top it off.

Maybe for now I’ll keep my cultural exploration of the Philippines to the northern part…..took this photo yesterday of a really pimpin’ jeepnee.

Oh No! Heading Back to Manila, Philippines!