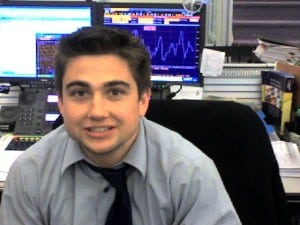 I’ve been thinking a lot, and with my big shift from fixed office to coworking and freelancing, I think back to my time four years ago at Deutsche Bank and when I put in my notice to leave my job. My manager I guess kind of expected it, I had already filed with them (per SEC regulations) that I had a company setup years ago for selling online, but I told him officially I wanted to leave the day job and work on my hopes, dreams, and aspirations of an online business fulltime. He supported me! Heck, he even said he wanted his son to have a talk to me about entrepreneurship and small business when he gets older (yep, this offer still stands)

It was hard to quit my job, but after it was announced to him and to my fellow workmates, it was a sigh of relief. I actually did enjoy the team I was working with, I just wanted MORE CHALLENGING WORK. I w as working on Wall street, I saw psychiatrists and they would tell me how can I not be happy, I am working in a dream job in the center of the world, a dream to so many…..I JUST WAS NOT SATISIFIED OF THIS BEING MY LIFE, to go to a job to do work I wasn’t fulfilled doing, to repeat over and over, I needed to take more RISKS.

Anyway, in this dream I had, I mentioned that I wanted to do my own business full time, and then my manager told me, well “we have this incubator program” and if you stay with us, you can work there and we have a huge network of support services to get you on your feet, for a minority share of your business.

IMAGINE THAT! Yea, I know, “in your dreams”

This dream came from some articles I read of Yahoo! Company setting up a free coworking space in Silicon Valley near its own office to attract entrepreneurs and startups, to inspire them to work inside Yahoo! Or maybe be acquisition targets, whatever the exact reason Yahoo setup this free coworkign space is to ATTRACT TALENT! Entrepreneurs HAVE GUTS, they are motivated to do something different, to change something, to make a difference….and I see Yahoo! Making a smart move having this coworkign space near their office, I am almost certain it will be a positive return on their investment.

Then you see Google now making some changes, with Larry Page coming in as CEO again, and trying to cut out the red tape as Google has grown to be so massive

INNOVATION IS KEY TO ANY COMPANY.

Just seems that as companies get bigger, they get more inefficient, slower, and “dumber”. I mean, really. I don’t know how Google can spin things around being so massive…. There have been blogs I’ve read that say Google should also have an internal incubator, and when staff want to leave to do their own startup, maybe Google can incubate them inside their own company, but LET THE STARTUP be free of all that red tape and office politic crap that slows them down……

Yet, then if Google were to implement that, wouldn’t every staff want to quit and work in the incubator? And by trying to quit, you would be rewarded.

Maybe the Richard Branson method is the best way, allow all these projects to be run independently from the parent company, don’t herd sheep, harvest cats as he says. I’m not an organizational structure expert, but I just can’t help but feel huge, massive technology companies are efficient and effective, and over and over I see startups that are bought out by these massive companies lose their key people, lose their drive, and flop.

Anyway, wonder what I would have said if my old manager had let me startup my company with the support of Deutsche Bank instead of leaving the company. I would have seriously considered it, heck, if I had known they had that platform I would have been applying for it as soon as possible! But these large banks are afraid to be different.

Putting More Internal Pressure on Myself then Ever Before

Steve Jobs Talks on the Meaning of Life. Poke Life!

If You’re Going to Do Blackhat things – Keep your mouth shut!