I remember reading a book by Bruce Williams called “Thanks For Asking”. Bruce Williams is a radio show talk show host my father loves to listen to. If you would like to read more, here is Bruce William’s bio and website

I remember my dad giving handing the book over to me when I was in university. It was a great read, and I recommend it for those looking to start a business and learn the mindset of HUSTLE, as Bruce Williams truly is a hustler. I like in his book he says he can be dropped anywhere on this earth, in the middle of nowhere, and survive – and THRIVE. I wish I had the book here in China, but I was able to get a scanned copy of the book cover – and here is an excerpt from the book:

Putting together a book of this kind is a good deal like somebody asking you to write your own obituary. You’re not quite sure what you should put in and what should be omitted. Upon reading all of this, I’m not at all sure I’ve accomplished my mission. I have tried to be candid and use the stories that were pertinent to the points I wanted to make. …………….It is disquieting when you get into something of this nature. It forces one to realize how far one has come along life’s path and how relatively little time remains. 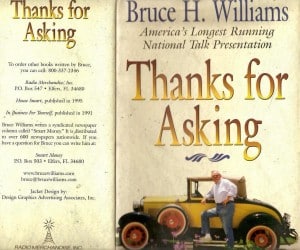 But this guy Bruce Williams, he straight shoots from the guy. A hustler, a warrior, a survivor and comes out on top. I actually called into his nightly talk radio station when I was just starting up a company in 2004. I remember being amazed how quickly the operator connected me through to Bruce – LIVE recording. I told him I was starting a company and I wasn’t exactly sure what to do. He asked me how it was structured, I told him it was a New York general partnership. He quickly told me I was wrong, and I have to limit my liability as an individual owner – and therefore I should as soon as possible close that and re-open a LLC or corporation. He said, especially in USA, where people love to issue lawsuits, you need to protect you personal assets and therefore create a corporate veil as this LLC or corporation. He is a fast thinker, and immediately pointed me in the right direction – and he was dead on.

Later I remember a friend telling me she had her own business, and for tax reasons, put her company logo on the car so she could write off some of the expenses. Unfortunately, she got in a car accident – not a major accident, but enough to cause significant damage to both cars. The other car owner saw her company logo and immediately thought he could get some money sueing her. DAMN, she only had a sole proprietorship company – therefore the liability of that lawsuit went to her personal assets. Horrible story. But again, reasons you need to protect yourself from your own company, and draw the line between personal and business, even if it may cost some extra money with accountants and government filings.

But back to Bruce Williams, I remember in his book, he had a nursery school startup with his wife, and he still had to be a taxi driver in Newark, New Jersey at nights to build up cash. Newark has always been a rather rough city, then and now. He explains one night a woman was giving birth in the back of his taxi as he raced to the hospital. The stories he has in his book are amazing….and he just never gave up, never stopped. Always found a way to make situations work, and that is what it takes to be a hustler.

Maybe this book changed me in some way, but I think I was on that track already. I want to be able to be placed anywhere in the world, and be able to survive. I remember in Boy Scouts, I would love the “survivor” weekends where we were only able to bring a knife and some matches and had to survive for a day or two far out in the woods. And then I would have to build a shelter, wouldn’t really eat much, just the damn bugs (mosquitoes) biting the hell out of me at night was the most annoying part. But this mindset, to be able to get on whereever I am…..I keep trying to take the next challenge, another country, another business adventure. Limited resources, not sure who to trust, where to go, what to do. As much as I get stressed out, I have to realize life, in some ways, is a game, and it is only ourselves who truly define the ending.

Most People Are a Direct Reflection of Their Peers

Yesterday was the last day