Again, I feel spoiled (fortunate!) to be an American….seeing these political and economical troubles still shocking to me…..Bangkok, Thailand is such a beautiful city, yet there is political unrest. I am not at all an expert on the political conditions, nor do I want to study them that deeply, but basically there is an uprising in the people about the current government. The protesters feel that there is corruption in the government, and they want the current leaders to step out of office for a re-election. The protestors have squatted in major parts of the city center, and while there hasn’t been much violence, businesses are not open, MALLS ARE COMPLETELY EMPTY in the middle of a weekday……company offices are closed off. The protestors have these bamboo sticks, tires, and flags built as barriers. The call themselves the “red shirts”. 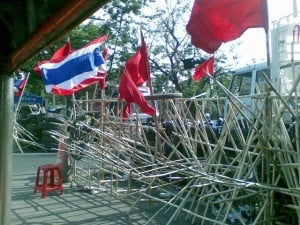 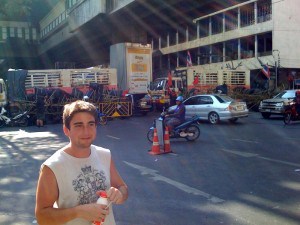 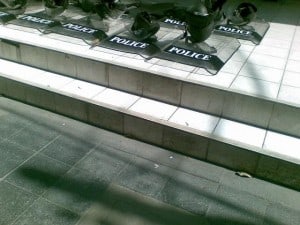 I am not going to say it is anarchy or any type of mayhem – but it is definitely not a good thing for BUSINESS. Imagine if you are an owner of a company or retail shop in that area…you are losing SO MUCH MONEY RIGHT NOW. And its not like there is an insurance to protect you – or does it fall under “natural disaster” insurance? And who would pay for those types of insurances anyway…..
Again, I guess this is why I am fortunate to be an American….its rather safe and stable economy. It also makes you realize the risk/reward formula in business….if you take higher risks, you get higher reward potential. Meaning, if you setup shop in Thailand, sure costs are low, maybe there are new markets to be made, less informed competitors – but things like this may happen and interrupt your business.
Now that I am back to China – actually, I believe China is getting to be a more STABLE place to do business…..its just FOREIGN to FOREIGNERS. The Chinese government fights hard to keep stability in its economy and government. That is what the Chinese people know and understand….and TRUST. They may not agree with some of the things their government does, but they know the Chinese government does these things to provide a better economic / financial environment for its people.

Will Living in Thailand Make You Lazy?