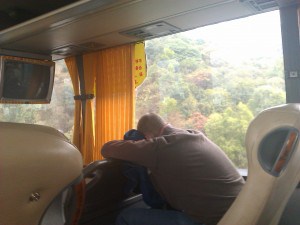 Monday morning and heading back to Dongguan from Shenzhen via bus. Wondering if this will become my normal weekend in 2011? Still trying to firm up my personal physical LOCATION strategy….many friends ask if I do an online business, why is location so important, why do I travel so much?

Well, maybe because not many other people are moving around….so I have to (and overall enjoy) travel around to build up relationships and maximize the pros and minimize the cons of doing business in each of these areas.

Seems I will spend my weekdays in Dongguan, on site where this factory, Five Islands is converting into an ecommerce fulfillment center and wholesale buyer’s club. I’m going to build up a dedicated team for their SEO and internet marketing projects there, while also keeping my “fragmented” network of operations in other Chinese cities and in the Philippines.

While I have been learning a lot in Dongguan, being submerged in a pure chinese operation, I do need to get out a bit. But this past weekend was a bit draining….leaving Friday to Hong Kong for the night, having a huge dinner w/ Cindy and Lammy’s friends (still getting facebook tag notifications in my email box), connecting new people, meeting others. Crashing couches, with an occasional hostel or hotel along the way. 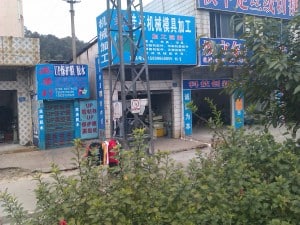 I had made more meeting plans in Hong Kong on Saturday afternoon…..but had a last minute invite for a Chinese new year dinner in Guangzhou with Gary and the new Five Islands team….so had to cancel those (even though maybe I thought I had already cancelled), just so busy chatting to people online, email, scheduling…I really need an assistant with me at all times! Hope I don’t lose friends as life is moving so fast, moving city to city…trying my best to plan meetings while also adapting to changing environments. Again, my trying to do too much, being nice, not saying no, and indirectness at times is the main culprit.

Leaving Hong Kong Saturday morning, stopped by Dong guan for a couple hours, as there was a tour of the new facility by the Hong Kong office and Guangzhou office….the five islands Dongguan ecommerce warehouse is a new project and like a “Special operations” or incubator project within this larger network of factories and trading companies. Luckily we had stopped by Dongguan first, so I could change into a suit for the formal Chinese New Years Dinner.

Then driving to Guangzhou, arriving approximately 4pm, visiting the trading company’s product showroom, shaking hands with approximately 300 workers in this factory and trading company network between Hong Kong, Dongguan, and Guangzhou….really overwhelming….and my being the only gweilo, maybe felt some indirect cultural pressure and extra eyeball attention (though I am getting quite used to it being in China / Asia for the past 3 years)

Since there were people going back to Hong Kong, I decided to get off at the Huanggong, Shenzhen border as I had some ecommerce meetings scheduled in Shenzhen on Sunday. Checking in with Dave Ho to see where he’s at, and he wasn’t at his apartment and therefore I met him at a bar in Coco park (yes, in my suit with my luggage….good thing I travel light). Stuffing my laptop and backpack into a locker, I continued my networking….already running out of namecards…..saving numbers on my phone, emailing directly my contact info to people as I got their namecard. Hyper ACTIVE networking….
Unfortunately later in the evening my mobile phone was stolen along with his (wow these theieves are good ,stole both ours in a 2 minute window)…..putting a damper on my exhausting weekend. So Sunday morning head over to China mobile to get a new SIM card, and Dave let me use an old school nokia phone for temporary use….then heading directly to a meeting with Guang Yao for coffee, discussing future ecommerce meetups…..to more meetings with Chinese internet gurus in OCT (overseas Chinese Town). After the meeting, digital boy (David Chang) from geek cook dropped me off at my Australian programmer friend, Leon’s, place in Futian where we talked about domaining and outsourcing management. Bought a phone off him, android HTC wildfire, a much more compact, less flashy smartphone that may not get as much attention by thieves, changed my passwords (well the more frequently used ones), and got back on my “mobile internet life” back in order.

Leon wanted to come see Dong guan operations and came along for the trip, so he’s sleeping in the bus next to me (photo in this entry) and will get a tour of things and stay until tomorrow. I’ll be here till Thursday, then to Hong Kong.

Life in the world of PRD (Pearl River Delta).

This is my life, I’m a living, breathing, social media networking machine…..blogging on a bus, Leon tried working on ths bus here but he said it makes him nauseous…..I have gotten past that a long time ago…realizing I have to learn to work on the move in order to maintain the lifestyle I want.

Opening companies in the face of world recession.

Pushing It – Aiming For a Quick BootUP! Weekend, Build a startup in 54 hours!