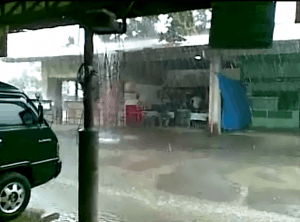 I’m going to experience a typhoon while down here in Philippines. Its on its way now, and the electricity here has already blown out once an hour ago, but popped back on recently.

Again, I think this is a big reason there isn’t more foreign investment in this country – its INFRASTRUCTURE! When I was at Deutsche Bank, and management was outsourcing their trading operations to India – I asked them why or how they choose it. Of course there was a lot of PC (politically correct) bullshit in the response, but one was STABLE INFRASTRUCTURE – phone lines, internet lines wouldn’t cut out, and also there was faster options for internet.

Here’s a quick video I took, my cameraphone doesn’t show it the way it is deserved to be shown, but to give you an idea

I am in metro manila, the capital area of Philippines, and even here electricity blows out. I wish I could have the office out in the beach, or a resort in Philippines, but DEFINITELY electricity and internet would be out multiple times per week even. And slow. That is why I was forced (well, you know what I mean) to set up in metro Manila. But even now, electricity has been lost 2 times in the past month from Typhoons.

Marie is telling me that if the electricity goes out 6 times in one night, then the 7th it will FOR SURE not come back on. Don’t know the reason behind that, wonder actually how electricity is turned back on after a blackout or brownout anyway….but here it seems they don’t “flip the switch” after the 6th time!

People have suggested to get a power generator to backup things, the cost for the generator here in the Philippines is around $150 to $200usd that would power maybe a 80 square meter apartment for 2 – 3 people.

Other ideas is to have offices in different locations in the Philippines, one in Northern Philippines (metro manila) and the other in Southern (central) Philippines – in the city Cebu. That seems crazy, and I’m told sometimes cell phones don’t even work under certain weather conditions….so how could the Manila office even communicate with the Cebu office if there were a typhoon or some disaster.

Just more of the risks in doing international business…..

Preparing to Fly into a Typhoon in the Philippines!

One Person At a Time