its will and drive.
its about focus.
Its about going against the odds.
Its having the strength to keep going, even when maybe your closest friends think you’re completely insane.

I just refuse to give up. Maybe its the way I grew up, but I feel I need to be a street fighter, a scrapper. Life isn’t about taking the easy path – ITS MAKING YOUR OWN DAMN PATH. Make them get out of your way if they don’t agree. 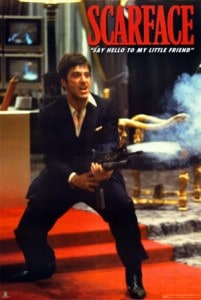 Many books and movies motivate me, but still nothing more then Scarface! I included a photos on this blog post, and its Tony in the movie blowing away people as a druglord is sending hundreds of thugs to kill him in his home (mansion).

That is how Tony dealt with things. he didn’t run and hide, he came straight for those guys – head on. Even with all his guards / gang allies dead, he blew through his office doors and blasted away everyone he could get. Of course he dies, but he goes out blazing. What else could he do? He was surrounded. He could have either done what he did and gone out blasting, or he could have hidden, or maybe killed himself before they killed him.

But he dealt with it head on. And he came from NOTHING, a FOB (“fresh off the boat”) from Cuba. He was washing dishes at a corner restaurant in Miami. Sure, he choose to go into mafia and drug trafficking, but all the odds were against him. So many times in the movie, people underestimated him, saw him as a piece of shit – you know what he does, he proves them wrong.

So people can try to start a business with money alone, but it takes WILL, and Drive, and focus for success to get there. Just never give up, and just do it.

don’t let them get the best of me……

Halfway Through 2015 – Checking In On New Years Goals

final boarding call for flight 99 from newark to hong kong…