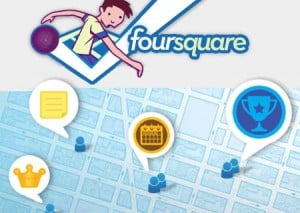 For those of you not aware of this, one of the new things now is geo-based social networking…allowing you to share with the world where you are at the moment. I think this is pretty awesome, though I am aware the majority of people probably think invasion of privacy, security risks (“I know when you’re home, and when you’re not” TV commercial for home security systems comes right to my mind), and fear your friens may get jealous when you say you don’t feel like going out tonight and see you check in at a mall nearby….

But this is further in the development of LIFE! Not just the internet here, its affecting our lives…the way we decide what we are going to do, where we will go.

For me personally, its pretty freaking awesome, I have been checking into places all over the world….making my mark online. And at the same time, I see people around me in that area, both friends I already know, and meeting new people along the way. I have made friends in Philippines (MikeMo!) as well as re-connected with friends in NYC (Christina!) who saw me check in nearby on those locations. I remember meeting up with Christina a couple months ago and she said she saw me check into JFK airport in new york and got excited. She mentioned she keeps seeing me eating at taco bell in the Philippines….that is just hilarious to me.

People see where you eat, shop, how long you are at work. And you share this with your friends…..

This is one thing I miss in USA, more people use it there then in China, where its blocked by the chinese firewall (Well for some reason it works on my mobile phone via china mobile GPRS…but shhhhh, don’t tell the Beijing government) but not on the website. In America, there was a SWARM in the LAX (Los Angeles) Airport, which is when more then 50 people are checked into the same place at the same time.

I can only imagine this further evolving. I forget the name, but one system I heard that is developed or under development is a social system that shares your credit card transactions on your social media accounts. Imagine that! Makes you think twice before buying that mcdonalds food when you’re trying to lose weight right? Or imagine stores can give you discounts if you buy from them three times, or at certain times or seasons or days of the week.

My friend I met in New york, Billy Chasen, has another cool venture (he’s more of an entrepreneur then even me!) working on a mobile app called stickybits – which lets you scan barcodes of products and add them to your account. Why do that? See who else has scanned them, what they have to say about that product. Or maybe you can price compare, see what stores are selling it. How long its been on the market. This is an awesome idea. He just did a promotion that if you scan in mentos gum (I think that is the product) then you can get a coupon for a free one – something of this matter. How awesome is that. Imagine the marketing programs a business can run with this.

Sure, there will be many people who resist all of this sharing of their “personal information”, but really, it helps people find other like minded people, get work done faster, and improve efficiency by allowing people to find the best deals, closest location, and tips from friends.