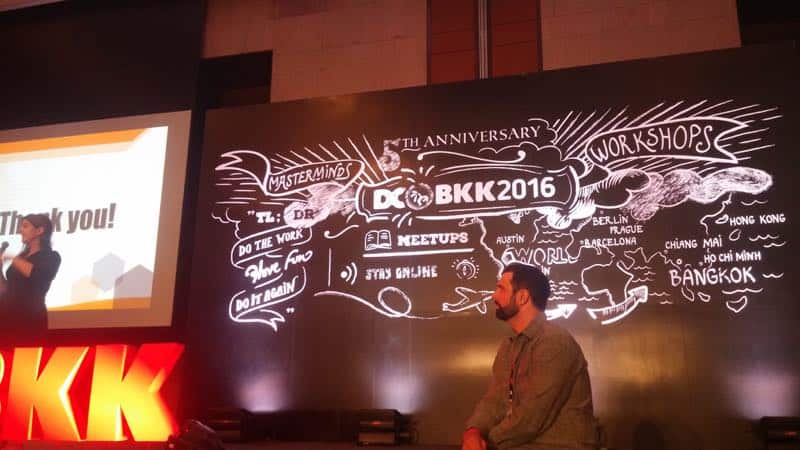 As always, I am super overloaded with amazing information and action items from the DCBKK event. Still deep in the event today on day 2 but wanted to write up what I learned yesterday at day 1.

Many of the questions from the audience was similar to what I was thinking – how to deal with marriage and business, and having a husband and wife work on the same business together. She said think about the brain – are they going to have the mindset of growing and making something, or do they need stability and control? While it is ok to have a spouse who has a more conservative approach, you need to be aware of that and adjust. Of course it depends on the couple and the business situation so she needed to talk to these specific people after the presentation.

Made me feel I am doing things somewhat right with my personal blog and video blog now. I put it out there and try to show who I really am. Gave me confidence to keep, “keeping it real” and that it will generally keep things running smooth.

Then she insisted we take a vacation. Test the business structure and see if things can operate without you, if you are so stuck on the business. This is something I need to really work on, and look forward to one day, hopefully soon.

Then we had Nathan Barry and he shared about how to grow your business using direct sales. Which is something I thought he would have experience in, or be the person to discuss this. I always think of him as the content marketer and selling his books online as a way to convert his traffic.

So when he launched ConvertKit, seems that content marketing wasn’t converting those visitors to customers. He mentioned that with a 2% conversion rate on your website, that means 98 out of 100 people are walking into your shop and then leaving. That in real life, that is not acceptable, and so he moved into doing direct sales to jump start ConvertKit.

So he explained how he did scraping, mail merging, and outreach to bloggers in specific niches. Those that were on Mailchimp and other systems and needed to make some moves. He explained that they didn’t know how to, or didn’t want to invest the time in, switching service providers. This led him to doing full service migrations where he would actually dig into their WordPress and do it for them.

Do things that don’t scale.

A buzzword, but he actually did it. And even when he was making a lot of money selling his eBooks, he was getting his hands dirty. Doing outreach, getting on the phone with bloggers, and doing manual migrations himself. He explained that you need to suck it up at the beginning, don’t think of your per hour rate as something astronomical – because at the early stages it is worth nothing if you have no customers.

Then he showed his hockey stick growth of his business, now making 441,000 USD MRR (monthly recurring revenue) which is insane. Was cool to hear him be a bit vulnerable and explain how he invested his last chunk of money into it and his discussions with his wife on it.

Then afternoon break out sessions started. I picked more website teardowns. Had one done earlier in the week, but always can learn from other people’s websites and various user testing and perspectives.

Brett from Learnthaifromawhiteguy.com was first, and Noah, Ian, and the audience got to dig in with some jokes and suggestions.

Noah keeps things entertaining, and then as we dug through about 5 different websites he explained how he thinks testimonials on websites are all lies. He said that he knows we pick the best people, our friends, to leave these reviews.

So he suggested something like the anti-review. Just to change things up a bit and see if people noticed. That it is more genuine.

After the presentation I had him leave an anti-review for GlobalFromAsia.com put it right on the homepage.

All in good fun!

This had the angle of doing it through an e-commerce shop, but was highly recommended by others in other sessions. And I was not let down – Brandon Nolte dropped a ton of value about how he scaled up his e-commerce business through content and organic traffic.

His products are questionable and are blocked on Amazon, Google Ads, and Facebook – so he was only left with building out his own platform. Wow, he systematized this to a science. He has google spreadsheets mapping out tons of new articles, keywords as the focus, with writers and then editors to the people who post the article on WordPress. He drives them to his Woo Commerce shop and the traffic has been building up and up.

Even an hour and a half session didn’t leave enough time for him to dig into how he gets their email and closes them on an auto-responder series. But his charts of traffic growth has been amazing.

These events always get me excited to build up current businesses as well as start new ones! My most exciting part is to be surrounded by internet business owners like me and get inspiration and tips on how to get business to the next level.

My to do list is huge, but it will get done. Really ready to level up for the next DCBKK 2017.

And day 2 hasn’t even started yet. Life is really amazing, and I hope to keep the freedom and opportunity to grow and excel every day of the week.

Reflecting, maybe its my birthday coming

Another Epic Event in the Books – Cross Border Matchmaker

Maybe Being Open on this Blog is Helping!