Another July 4th in China. This year had a bit of a different style to it. The US Embassy invited me to Guangzhou for the Celebration of the 239th year of the United States of America. Sure I’ll take them up on the offer!

Haven’t been to Guangzhou since going last year for Miles emergency passport. Walking back into the US Consultate for the party brought back memories from that frantic time.

American flags covered the US consulate, more than usual. Various posters of the phases of the American flag over the years. In addition to the flags, there was also some backdrops for various photos with scenes of famous areas in USA.

In today’s blog post I was able to catch a photo on the main stage with the San Francisco bay in the background. The logo of the Yin Yang of the American and Chinese flag is pretty unique.

They even opened up the second floor. This is where the US citizen services booths are. Walking upstairs I found The teller windows shut and sealed, so it was just the seating area able to access.

Hot dogs and hamburgers served in the courtyard, a US military color guard for the delivering of the flags at the ceremony. Felt as close to America as I ever have over here in Asia.

The speeches discussed how America and China are getting closer and closer, and are the 2 major economies of the world. Need to set the precedent for the rest of the world in such matters as taking care of environment.

I wonder – the US / China relationship is such a dynamic and complex one, but it is true, both are so intertwined and co-dependant now. One of the speakers said something along the lines of: “do unto others as you want done unto you”. He was speaking in the context of the American and Chinese policies towards each other. 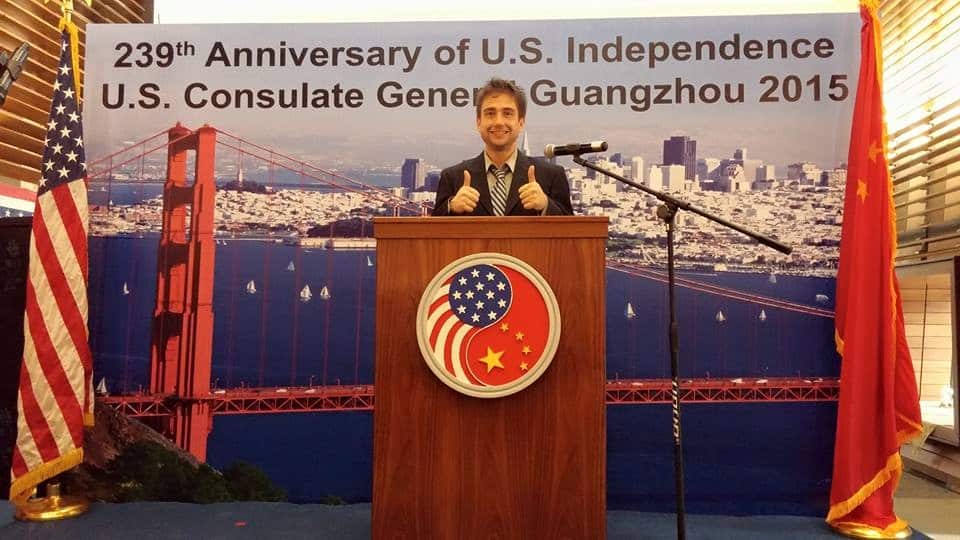 For sure the ability for Chinese and Americans to go between each other’s countries has opened up quite a lot.

Let’s see where this takes us, but it will continue to be a hot topic- America and China relationship.

Preparing to Return to Shenzhen for Startup weekend, Nov 9-11

Foreign Companies Getting Squeezed for Pay Increases in China