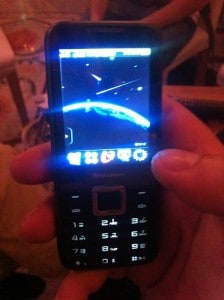 Vlad had this hilarious phone, by Lenovo, he bought in China wal mart – and he described a bunch of the features….let me explain the different features to highlight, and reflect on these points and explain how this is directly made for the China market.

This article may make more sense for those of us doing business in China….but I can see how handy this phone can be!

We also discussed how this is the perfect example that China …is China….and you need to make localized products specially tailored for this unique, and wild, market.

Speaker at Next Step China in Shanghai, Tues June 26