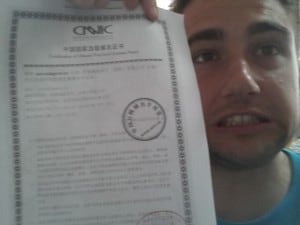 Note: Amy / Melissa please do not translate this blog post to my Chinese blog as is may be too sensitive and might be blocked inside Chinese internet. Honestly I hope this English blog isn’t blocked due to this post (or hacked…). Honestly, I will try not to write anything offensive or against Chinese government here – I am just explaining why the Chinese internet is regulated as it is. And I also hope this USA hosting company doesn’t ban my hosting account for writing this either – but they will monitor it.

Honestly, I’m a bit nervous making this post, but I just think it will shed some light on how there will continue to be lines drawn in the sand in the internet cyberworld.

Firstly, I am not interested in politics. I am an internet entrepreneur. I’m an American social media fanatic inside the Chinese firewall. Most of my western friends in China do export based businesses, in traditional industries. I am a bit different, but really, I am also just a businessman, and I am writing this blog post simply to help make those curious to know my experiences and standpoint as to why China blocks websites.

Business in China for me will continue to get harder, as an American wanting to do an Chinese internet startup – its almost like an oxymoron.

John Snowden Seen as a Hero in China

Anyone who hasn’t heard about the John Snowden NSA breach must be hiding under a rock. This South China Morning Post shows Chinese internet users see Snowden as a Hero, a lot of Chinese people have always felt that the American internet companies give up information to the US government. But it has always been denied.

Being a hyperactive social media snd internet user between usa and china for the past 6 years has made me question a lot of reasons why do I need all kinds of crazy tools to get into USA banks without being flagged as a hacker, or use other tools to access websites blocked in various countries. I’ve learned so much.

The internet was invented in America

The US government was the first to be involved with the creation of the internet, ARPANET for those who want to read it. It defined a lot of the technologies that have become the WWW (world wide web).

The majority of internet and tech companies have started in USA

I think we can all agree that the majority of creativity and innovation has happened in USA during this internet boom. I do see more innovation happening around the world now, but Silicon Valley I think is un-arguably the center of internet and technology startups (and why the heck aren’t I there?… haha).

What is a Server, and Data – and where are they hosted

Really quickly, I’ll assume everyone knows, but a server is basically a computer that other computers can access. And data is the information stored on those servers. This is the key part – they have to be HOSTED somewhere, that means in some country / state / city / colony / government regulated area, this data is on a server and is accessed by people from all over the world, or at least those who can reach that server (IP address).

Steve Jobs talks about privacy well in this Youtube video of his interview at D8. Privacy, he says, is basically allowing users to know what information they are sharing with the company that stores their information, as well if their data is then given/sold/rented/used to other companies.

So I think we would call privacy basically if users know how their data is used.

Its also not just your facebook posts, but also your email – who can see your email? Sounds crazy, but what if there is a legal issue – can a company or a government go into your email to check on a case?

Why Then Does China Block Websites?

Some say they want to block Facebook because they want a local Chinese company to be able to copy them and make money. I don’t think that is necessarily it. They want internet companies to host their data in Chinese servers, and therefore that data is accessible by the Chinese government.

China also doesn’t want it’s citizens data on a USA server where the US government and companies can access for political or business profiting.

There are a few cases already there are websites blocked or filtered for USA or other countries. Youku, the Chinese youtube, has some US Hollywood movies, and if you are in USA and trying to go to that link, you will not be able to view it. (To be clear, my friend Larry corrected me – Youku isn’t “blocked” outside of china – certain content was just licensed for mainland china market – no different than netflix. These are voluntary arrangements that content owners have negotiated with youku and Netflix. Different than govt blocking. Its actually Hollywood that requires their stuff on youku be blocked outside of china.)

Huawei, a Chinese telecommunications company that is a Cisco competitor, has been denied some US business access as US government agencies claim that it has spyware and other ways to track information and send it back to China. Chinese people feel that is just an excuse to keep US government agencies to have control and access to the data that is transmitted over those lines.

Its not only China who blocks facebook and other sites. I won’t list them, but in the middle east and other countries that may want to either block its people from reading the information, or from those other countries to have access to its citizens data.

Europe is also going through some anti-trust cases with Microsoft, Google, and other American technology companies about things such as data and anti-trust.

Governments realize how powerful the internet and social media is to influence people and form opinions and ideas. Sadly, the people will continue to see walls coming up in various forms and locations.

Hope this helps. And hope my blog stays online in most countries.

Walking Through a Shopping Mall …Market Research For Chinese Factories

Feel Like Another Version of Movie “Last King of Scotland”