Been on a roll with these meetups as I’ve been traveling……was using twitter to gather people, but really picking up more of an audience of like minded, open minded people in the couchsurfing community and while I took a quick trip down to Cebu from Manila, I posted an open ended meeting at Ayala Mall, Moon Cafe this past Tuesday afternoon.

I was surprized with the response, seriously I just posted it on Sunday night, 2 days before the meetup, and about 20 people were there. A decent mix of local filipinos and foreigners…all different types of backgrounds and experiences….married couples, single, travelers, etc.

Went with my friends Josh and Sheena, who are working together with me on some SEO and internet marketing projects down here in Cebu…they were a bit hesitant to go to a meeting of online people, joking about horror stories of the crazy people who you meet on the internet and the dangers, but they were curious enough to come along. 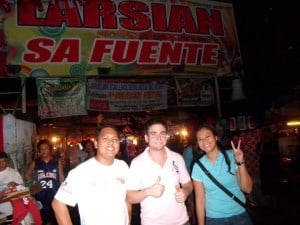 Comparing this to Manila meetup and hong Kong meetup, the Hong Kong and Manila were mostly purely promoted on twitter, while

this would have been only a couple people if only twitter invites…..almost everyone there was for CS (couchsurfing). Maybe this is the audience….twitter seems to have people more afraid to meet in real life….or less trust, while in couchsurfing, there is more trust from the online platform.

After the Moon Cafe mexican drinks and food, some of us went home, others walked around Mango Square….there is also the biggest celebration in Cebu all year – called Sinulog, which represents Spain bringing Christianity / Catholicism to the Philippines…..and unfortunately I’ll miss it this Friday – I didn’t know about it until a couple weeks ago, and already had my flights to Hong Kong booked…..would have to rebook everything….seems unreasonable for me…sure there will be next year.

But these couchsurfers will all be meeting up this weekend in Cebu for Sinulog, like a big extended family while you are traveling…..so refreshing to know this exists in the world. 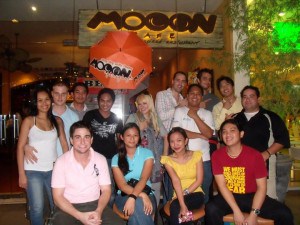 Thursday night I’ll be attending the CS meetup in Hong Kong….right after I land in Hong Kong airport….tonight I fly to Manila….meet a few people, networking, planning the cafe there and the home based workflow.

Just exhausting, but keep on going! Some people say organizing all these meetups is a waste of time, but I feel I have made some powerful connections, learned a lot about cultures, locals, and therefore been able to move in business much faster.

Been Busy Building a Startup Team for Weibo Agent

Putting Your REAL NAME on the internet, being YOU!