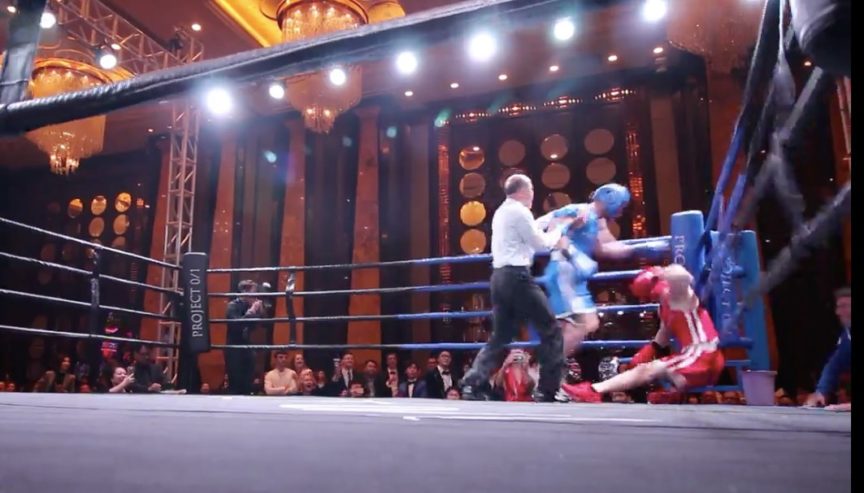 I had the pleasure to attend the third annual White Collar Fight Night in Shenzhen this past Saturday. John Graham and the crew continue to step up the game upgrading the venue to a bigger and better venue – at the Futian Sheraton Grand Ballroom.

A charity event, this boxing match engages the local community to step up and “fight” to aid those in China who need more. Proceeds from the night go to the Project 1 Foundation and there were plenty of chances to give money during a whole slew of charity auctions throughout the night.

Live streaming also happened for those who want to watch from home in China and around the world.

My favorite part of it is to see true “white collars” train for months to battle in front of the community. The take this serious with Invincible Training assisting many of the contestants over the training program to ensure they are ready for the match. A good mix of various weight classes, male and female bouts, and fighters from around the world – the audience gets an international experience.

Will you be a lover or a fighter in the next White Collar Fight Night? We are all lovers, right? But if you’d like to fight in the next fight, it isn’t just to fight – but to also support the local boxing community and charity – so what do you have to lose?

If its your first fight night, then you have to fight – haha – one of my favorite “Fight Club” movie quotes – hope to catch you all at the next White Collar Fight Night in Shenzhen in 2018!

Lei Gao On How To Work With Remote Or Virtual Teams

Couldn’t Help Myself – Back to Hosting Events Again

Becoming a Dad Every Day is Father’s Day